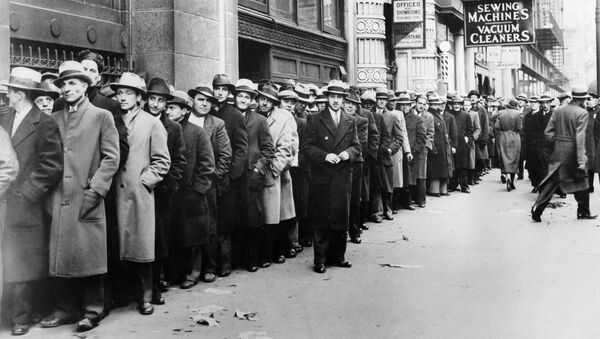 The US is mulling abandoning rules outlined by the World Trade Organization with a bill dubbed the 'Fair and Reciprocal Tariff Act'. If passed, the bill would give the president authority to raise tariffs without Congressional approval. Speaking to Sputnik, economics professor Pushan Dutt offered some surprising insight on US dependence on trade.

Sputnik: What chances does the Trump administration have with this initiative? How likely is Congress to approve it?

Pushan Dutt: I think this is the most serious play seen so far. It started as a threat to impose tariffs, then it led to a trade skirmish, and if the Trump administration starts withdrawing from the WTO it would be a full-blown trade war the likes of which we have not seen since the 1930s.

Trump Administration Prepares Bill Allowing US to Circumvent WTO Rules - Reports
This would lead to tremendous uncertainty in the global economy. All countries would be affected; it's a massive lose-lose situation. The thing which has been holding things together when Trump has been negotiating NAFTA or engaged in the dispute with China and the European Union is that the WTO's rules have been regarded as sacrosanct. If they are no longer sacrosanct, all bets are off.

Sputnik: Do you think there's a chance Congress will actually allow Trump to put this into place?

Pushan Dutt: So far, Congress has not put many blocks [on Trump], as long as it's been controlled by the Republican Party. We should also think about who is in charge in the Trump administration; his two top trade advisers, Peter Navarro and Robert Leitheiser, are both deep WTO skeptics.

So I've been expecting for quite some time that they will start disputing WTO rules, and most importantly, WTO adjudication of trade disputes. It will basically take one trade dispute to start complaining that the WTO rules are biased against them, and once they start withdrawing, and Congress does not act as a check, the only thing that could change is the US midterm elections, which might put a check [on Trump] if the Republicans lose one of the houses of Congress in the November midterms.

Sputnik: President Trump has been criticizing the WTO for ages. Do you think there's any substance to his criticism? Does the US really have a 'bad deal'?

Pushan Dutt: I don't think so. There are certain sectors where the tariff rates are going to be high in either the European Union, Japan or China, but every country has something similar: eventually, domestic lobbies become very powerful and they lobby for trade protection. Certain sectors, such as agriculture, have always seen very high levels of trade protection.

China to Uphold WTO Principles, Resist Trade Protectionism - Commerce Minister
What matters is the overall tariff level…[There] you'll see that the European tariffs against the US are actually quite low; the same is true for Canada, the same is true for Japan. What Trump does is seizes on one particular sector where the tariff rates are high for idiosyncratic reasons and uses this as a negotiating tactic.

Pushan Dutt: It is negotiating tactic in the sense that Trump sees these trade disputes and trade in general as a zero-sum game. So the thing that countries should do is exactly what they're going to do, which is not to give any concessions. Because if they do make concessions, he's going to pocket those concessions and come back demanding more. He will take that as a sign of weakness.

So I think with the initial shots that he fired, he was basically trying to see if they were going to blink or not, and I think the European Union, China and Canada are going down the right track, refusing to blink, and negotiating from a position of strength.

World
EU Warns US Against Car Tariffs, Response Could Affect $294 Bln in US Exports
Sputnik: Do you think that going forward this could actually be very damaging to US international trade?

Pushan Dutt: The US is a relatively closed economy; it doesn't trade much. It trades a lot with itself. So if we get a big trade war between let's say the US and China, the potential for damage to China is far greater, because they are much more export-dependent. The US is not so export or import dependent.

At the same time, the consumers will lose from this. A trade war shows up in the form of higher prices, and the costs are diffused among all 300 million Americans. So there will be some job losses, but trade is not a big source of movements in jobs. What will happen is prices will go up, and companies, especially multinationals which have to deal with global value chains, will face a lot of disruption.

Sputnik: Is the trade issue going to have an impact on the geopolitical image and clout of the United States?

Pushan Dutt: It's already had an impact. You could see in the tariff negotiations happening since March. First, countries tried to bargain, and then they realized very quickly that the Trump administration was not negotiating in good faith, at which point they retreated to their positions, which I think is the right thing to do.

Now, they simply do not take the US's promises and threats very seriously. This has already led to a depreciation of the US's role as someone who actually constructed and created the global trading order. If the US withdraws from the WTO (and the country had a big role in creating the WTO and [its predecessor the General Agreement on Tariffs and Trade), essentially it is going to concede the global stage to other countries like China.

Dr Pushan Dutt is a professor of economics and politics at the INSEAD school of business. The views expressed by Dr. Dutt are those of the speaker and do not necessarily reflect those of Sputnik.