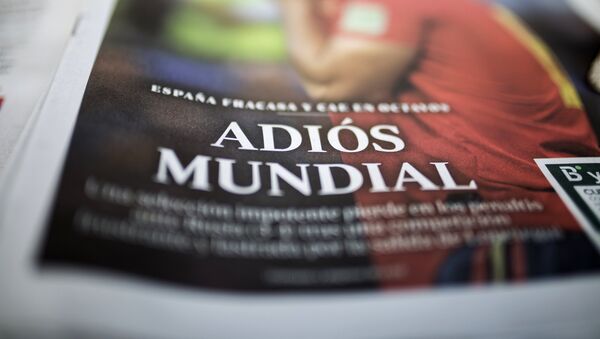 MADRID (Sputnik) - The majority of Spaniards think that their national team lost to Russia in the round of 16 at the World Cup because Julen Lopetegui was fired as Spain head coach just days before their opening match of the tournament, a poll conducted by the Spanish daily La Vanguardia revealed Monday.

Lopetegui was replaced by Spain's sporting director Fernando Hierro after agreeing to take charge of managerless Real Madrid after the World Cup without notifying the Royal Spanish Football Federation (RFEF) that he was in talks with the club.

According to the poll, 73 percent of the respondents thought Lopetegui's actions led to Sunday's penalty shootout defeat by Russia that sent the 2010 champions crashing out of the World Cup, while less than three percent blamed Hierro for the team's early exit from the tournament.

Complacency & Mistakes: Examining Spain’s Lackluster 2018 World Cup Performance
Almost 13 percent of Spaniards said that the players were guilty, and 12 percent put the blame on the RFEF.

Almost 7,000 people took part in the poll as of Monday.