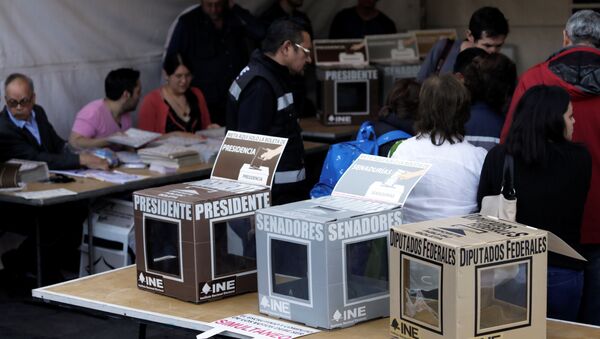 On Sunday, Mexico held its general election, while some regions were also voting at local elections. The country was set to elect its new president, 128 members of the Senate and 500 members of the Chamber of Deputies. Candidate Andres Manuel Lopez Obrador's opponents recognized their defeat and Obrador's victory in the election.

Incumbent President Enrique Pena Nieto from the ruling Institutional Revolutionary Party (PRI) is barred from seeking re-election, as Mexican head of state is limited to a single six-year term. The election campaigns at a local level were tainted by a whopping level of violence.

Reports Show Lopez Obrador With Landlside Win in Mexico Election
A member of the left-wing National Regeneration Movement (MORENA) was shot dead on Sunday in the southern state of Chiapas when he tried to prevent vote bribing, according to the Excelsior media outlet.

Previously, Mexican consulting firm Etellekt reported that 133 politicians have been murdered ahead of the Sunday elections with 48 of them actively running for office.