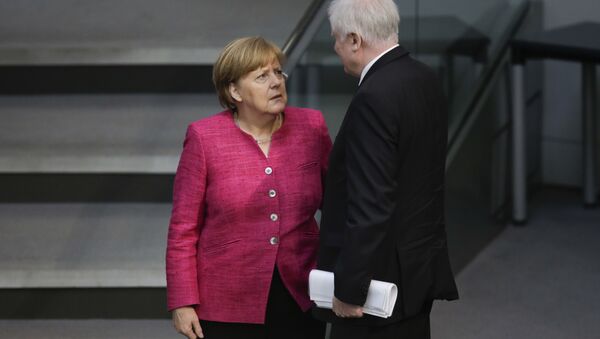 According to AFP, German Chancellor Angela Merkel reached a deal on the migration issue with her Interior Minister, Horst Seehofer, who is also party leader of Germany's Christian Social Union (CSU).

"We have reached an agreement after very intense negotiations," Seehofer was quoted as saying by AFP after hours of talks.

Germany's Interior Minister has dropped his threat to resign after tense negotiations with the German Chancellor's Christian Democratic Union (CDU), adding that the two conservative parties had tightened border controls, as he requested.

Germany's Seehofer Delays Resignation Amid Clash With Merkel on Migration
Seehofer confirmed earlier on Monday that he had offered his resignation as minister and as the CSU leader. Seehofer has been pushing for a harsher migration policy to reduce the number of new arrivals in Germany.

According to Reuters, Merkel, in turn, said Berlin would hold undocumented migrants registered in other EU states in special transit centers. Merkel reportedly stressed that the compromise between the CSU and CDU would secure the principle of freedom of movement within the EU while allowing Germany to take "national measures" to limit migrant arrivals.

"We want, on the one hand to set up transit center in Germany and from there carry out returns in agreement with countries from which asylum seekers come and where they are already registered," Merkel was quoted as saying by Reuters, adding that, "as such, the spirit of partnership in the European Union is preserved and at the same time an important step to order and control secondary migration and that's why i think that we have found a good compromise after tough negotiations and difficult days."

"It is exactly what was important for me," Merkel said, noting that the deal regulated only the secondary migration, as quoted by the Der Tagesspiegel newspaper on Monday.

Nearly Every Second German Wants Merkel to Quit Amid Fierce Migration Row - Poll
Over the past weeks, Horst Seehofer has been urging for a stricter border policy and proposed turning away migrants who had already been registered as asylum seekers in other EU countries or denied asylum. Merkel has called for a European solution to the problem. In a weekend interview with broadcaster ZDF, the chancellor said she believed the agreement she had reached with other EU leaders at last week's European Council corresponded to the CSU views on migration policy.

On Thursday, the European Council summit agreed on several aspects of EU migration policy, including the establishment of "regional disembarkation platforms in close cooperation with relevant third countries" and controlled centers in the EU member states to process asylum applications. The resettlement or relocation of migrants across the bloc is expected to be done on voluntary basis amid the lack of consensus.