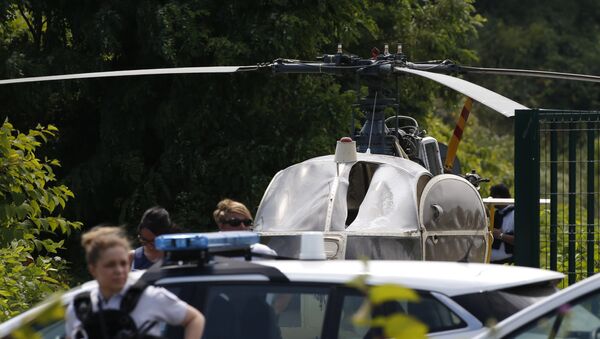 A massive manhunt for a runaway convict, who was imprisoned for robbing a bank and killing a police officer, is currently underway in France. Over the course of his criminal career, the convict managed to break out of prison in style, live on the run in Israel disguised as an Orthodox Jew and achieve a kind of folk hero status in Paris’s suburbs.

Nearly 3,000 policemen and gendarmes have been mobilized in France to search for Redoine Faid, 46, who escaped in a commandeered helicopter from a prison in the southeastern suburbs of Paris, according to a source of the French news agency AFP.

His two accomplices reportedly took a shocked flight instructor hostage, made him fly to the prison and broke into a visiting room, where the convicted repeat offender was meeting his brother, with smoke bombs and angle grinders, then flew away together in a helicopter, while the unarmed wardens activated the alarm. A video, filmed by one of the witnesses of the spectacular jail break, has recently emerged online.

The commando-style plot, which made headlines worldwide, took just 10 minutes to fulfill. The perpetrators of the jailbreak let the hostage instructor go and left the helicopter behind 60 km away from the prison. According to the cited sources, the police assume that Faid and his accomplices left the helicopter for a car, which was later found burnt in a shopping mall parking lot. According to French Justice Minister Nicole Belloubet, they allegedly "used drones to survey the location… the inquiry that's under way will tell us."

Redoine Faid, was behind a 2010 armed robbery in which a policewoman was killed. He was serving a 25-year-sentence, in accordance with an April appeals court decision, and has been in jail since 2011. He already made headlines with another movie-like prison break in 2013, when he took wardens hostage and escaped in a car, but was arrested a month later.

His criminal escapades became infamous in the 1990s, when he led a gang and robbed banks. Pursued by the police, he hid in Switzerland and Israel, where he disguised himself as an Orthodox Jew and even learned Hebrew for it, according to his autobiography, before being arrested in 1998. Later he co-wrote two book about his criminal path, nicknamed “Author” for his literary endeavors, made several TV appearances and achieved cult status in the blighted immigrant suburbs of Paris where he came from, according to the AFP.

His sources of inspiration has also been revealed to the public: in 2009 Faid told director Michael Mann, who created the 1995 “Heat” movie starring Al Pacino and Robert DeNiro, “You were my technical adviser.”