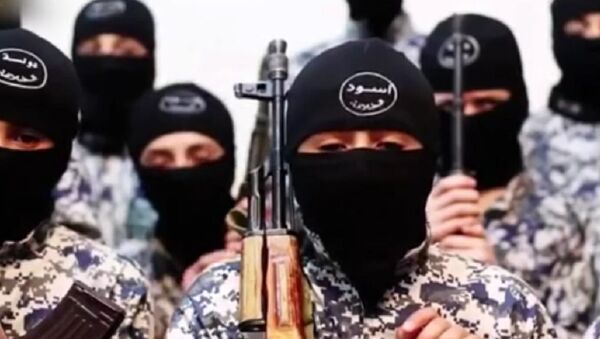 In early 2017, French jihadist Jonathan Geffroy was captured by the Free Syrian Army as he tried to flee Syria with his wife and two children. In September 2017, he was extradited to France, where he was accused of "criminal conspiracy in connection with a terrorist enterprise."

Former Daesh* militant Jonathan Geffroy was quoted by Le Monde as saying that the terrorist group planned to use children in order "to carry out suicide missions" in Europe.

"They recruited and trained orphans, and then you also have the wives of ISIS [Daesh] militants whose children have been indoctrinated with the group's ideology and who have been taught to hate the US-led coalition and Europe," Geffroy noted.

He revealed that he knew about "future external operations" due to be conducted "by children who grew up in the area and who, after adolescence, will be sent to the West, to Europe."

Geffroy added that Daesh's plan stipulated sending child soldiers off once they become teenagers – something that he said would keep security officials from using DNA and facial recognition software to monitor these kids.

He described the child soldier plan as a brainchild of the Clain brothers, thought to be among the highest-ranking French members of Daesh, who claimed responsibility for the deadly November 2015 terrorist attacks in Paris.

Le Monde cited Daesh losing its clout in Iraq and Syria, which could have hampered the plan.

The Young Lions of the Caliphate camp had everything necessary for military training, including obstacle courses, battle practice grounds and classrooms, the source said.

Dutch Counterterror Unit: Risk of Children Being Used by Daesh in Europe Attacks
In 2016, Europe's law enforcement agency warned of a "future security threat" to Western countries emanating from Daesh's "Cubs of the Caliphate" who the agency said might become the "next generation" of terrorists.

The security situation in Europe has significantly deteriorated in the wake of terrorist attacks claimed by Daesh, which had lost more than 90 percent of its territorial gains in Syria and Iraq due to the anti-terrorist efforts of Russia and Syria, as well as the US-led coalition's anti-terrorist efforts.