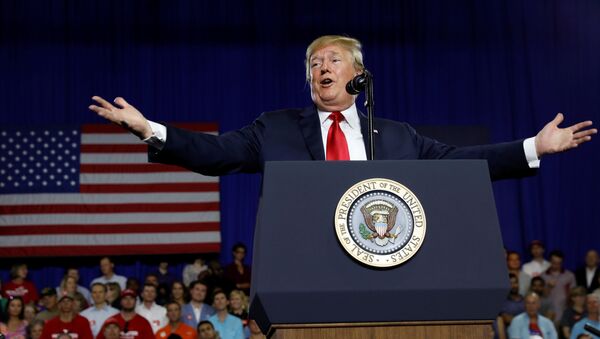 MOSCOW (Sputnik) – Saudi King Salman bin Abdulaziz Al Saud has made no specific promises to US President Donald Trump on the increase of oil production, according to media reports.

On Saturday, Trump said that he spoke to the Saudi king about the need to increase Saudi Arabia's oil production "maybe up to 2,000,000 barrels" due to unstable situation in Iran and Venezuela, stressing that the Saudi leader agreed with the proposal. Later on Saturday, the Saudi SPA news agency also reported about the conversation between Trump and Salman but has not mentioned the agreement announced by Trump. The agency reported that the leaders reaffirmed their commitment to maintaining stability of the oil market and the global economic growth.

​According to The Wall Street Journal, a high-ranking Saudi official said that the kingdom made no concrete promises to Trump but assured him of its ability to satisfy the market’s demands.

"Saudi Arabia does not really like going beyond 11 million barrels a day and has no intention of expanding its current production capacity. It is expensive," an unnamed Saudi official told The Wall Street Journal.

Iranian Official Slams Saudi Arabia, US for 'Ridiculing' OPEC
The Organization of the Petroleum Exporting Countries (OPEC) countries and other major oil producers reached an agreement at the end of 2016 to reduce oil output by 1.8 million barrels per day compared to October 2016. The deal, aimed at boosting oil prices, was prolonged twice, with the last extension set to last until the end of 2018.

Last week, OPEC countries and other major oil producers that participate in the 2016 Vienna cut deal agreed during a meeting in the Austrian capital to increase production to 1 million barrels per day, that is the volume of the countries' overcompliance with the agreement.