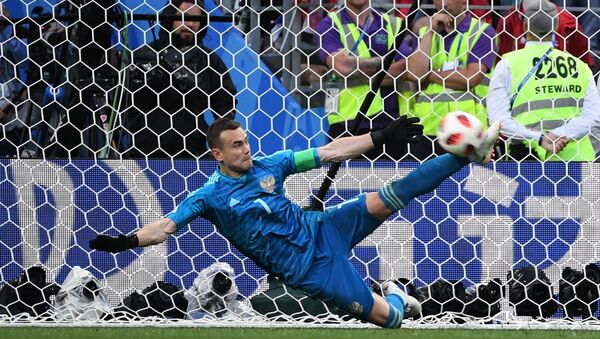 Russia is through to the World Cup quarterfinals after beating Spain during a penalty shootout at Luzhniki Stadium in Moscow. Russia soaked up long periods of pressure and defended resolutely before sealing the victory, and sending its home capacity crowd into rapture.

Russia has won its round of 16 match against Spain by winning the penalty shootout 4-3 due to two saves by goalkeeper Igor Akinfeev, ultimately making it to quarterfinals.

Russia and Spain tied 1-1 during the first 90 minutes of the match, and therefore played a half hour of overtime.

The record had been held by Honduras goalkeeper Noel Valladares who scored an own goal during a 2014 World Cup match against France at the age of 37. 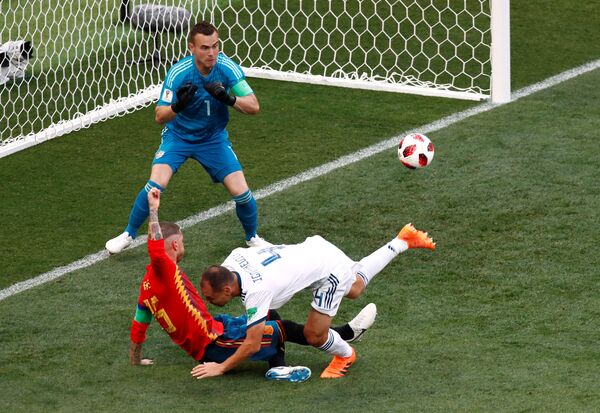 Striker Artem Dzyuba has scored a goal in the 41st minute after Russia had been awarded penalty due to Spanish defender Pique's handball.

Commenting on the goal, FIFA Secretary General Fatma Samoura stated that she thought she heard thunder after Dzyuba's strike.

"Wow what an atmosphere here tonight in Luzhniki Stadium. I thought… after Artem Dzyuba's equalizing goal that I heard thunder, but it was the roar of the Russian fans!" Samoura posted on Twitter. 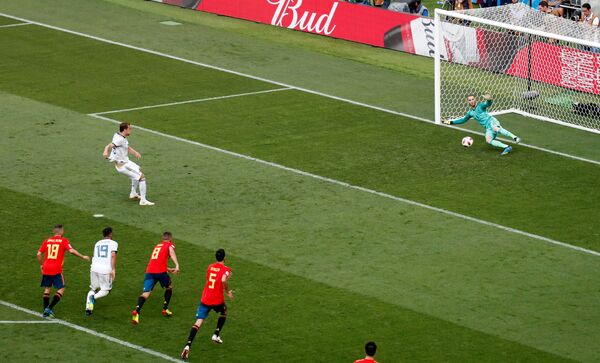 Russia and Spain headed to the penalty shootout as neither team had managed to take the lead during overtime. Koke's miss gave Russia the upper hand, and Igor Akinfeev sent Luzhniki Stadium into bedlam as he saved Iago Aspas' penalty with his feet.

Russia, which qualified for the knockout stage of the World Cup for the first time after failing to do so in their previous three attempts, is now through to the last eight, while Spain is no longer in the tournament.

Russian fans, as well as the whole country, are overwhelmed by the victory.

Russia will now face either Croatia or Denmark, which also play on Sunday in the Russian city of Nizhny Novgorod.

Akinfeev Named the Man of the Match

Russia goalkeeper and captain Igor Akinfeev was named the man of the match, though, as he said, he did not feel he was the best player during the game.

"I don't feel that I'm the best player. The game turned out to be exciting. We wanted to attack more, but there's no team who could attack more in a match against Spain. We were lucky today," Akinfeev told journalists.

He has become Russia's second-most capped player on Sunday, having shifted former defender Viktor Onopko into third place. This is Akinfeev's 110th game with the Russian national team; he made his debut in 2004, while Onopko was capped for Russia 109 times from 1992 to 2004.

Thirty-eight-year-old CSKA Moscow and Russia defender Sergei Ignashevich is Russia's most capped player. The match against Spain was his 126th game with the national team since 2002.

Russia's "Fight to the Death"

Ahead of the key match, Russian striker Artem Dzyuba said that the team would have to "fight to the death" in order to win the FIFA World Cup round match against the winners of Group B. Spain qualified from its so-called "group of death" after beating Morocco, while Russia won two matches in the group stage, but was defeated 3-0 by Uruguay.

The match between Russia and Spain was played in front of a sell-out crowd of 78,011 fans, FIFA said on its official website. The official capacity of the stadium during the 2018 FIFA World Cup is 78,011 people.

The last time Russia played Spain, the winner of the 2010 World Cup, was in a friendly game in November 2017 where they drew 3-3.