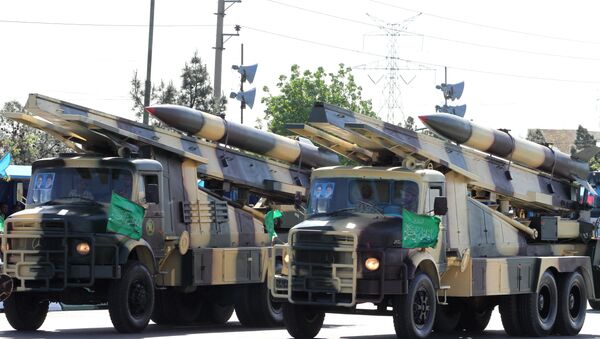 © AFP 2021 / ATTA KENARE
Subscribe
In its report, a local office of the German homeland security agency has alleged that the Islamic Republic has repeatedly tried to get its hands on the goods and technology necessary for developing weapons of mass destruction, and is working on its missile program.

The regional Office for the Protection of the Constitution in the state of North Rheine Westphalia, which is Germany’s most populated state and a stronghold for key industries, has stated in its annual report on 2017:

“After the Iran nuclear agreement came into force in 2016, a sharp decrease in Iran’s attempts to purchase products [for developing mass destruction weapons] was registered.  Due to the development of its missile program, Iran remains focused on countering weapons proliferation. In addition, an increasing number of Pakistan’s attempts have been identified. However, in the majority of cases, no delivery of the goods succeeded.“

The security service has revealed in its report, that it’s been able to warn the local companies and avert the suspicious deals on the so called dual-use goods and know-hows, which can be used both in civilian industries and for producing weapons.

Apart from Iran and Pakistan, North Korea and Syria have reportedly been under the suspicion of the German security services. They fear that these countries can use weapons of mass destruction in inner conflicts or as political leverage.

According to the report, the true destinations of goods in deals with between German firms can be concealed with an address in the generally unsuspicious countries. The illicit purchasers previously used nets of cover companies and strawmen to order the details, needed for making WMDs. As the German intelligence office stated, it works with the German companies and give red flags for suspicious circumstances of the deal, if it’s needed.

Additionally, the German security services have revealed the activities of the Islamic Republic’s Ministry of Information and Security, spying on the country’s civilians both in Iran and abroad. The increased number of activities by the so-called Quds Force Brigade, which is a special espionage department of the Revolutionary Guards (IRGC), have been discovered.

In 2015, Iran on the one hand and the United States, Russia, China, the United Kingdom and France, Germany and the European Union on the other struck the so called Joint Comprehensive Plan of Actions (JCPOA). They  struck the deal, according to which the Islamic Republic agreed to shut down its military nuclear program in exchange for the lifting of sanctions against the country. The international nuclear watchdog, the International Atomic Energy Agency (IAEA), was chosen to control the deal, and has found no breaches of the JCPOA conditions by Iran so far.

However, the agreement didn’t cover Iran’s ambition to develop rocket and carrier technology programs. On September 23, 2017, Iran reported its own "successful" test of the medium-range missile "Chorramshahr”. Thus, the country now has at least three types of missiles with ranges up to 2,000 km. The regional office of the Office for the Protection of the Constitution in the southern state of Baden Württemberg recently reported that Iran is focused on the acquisition of vacuum and control technology, and is measuring instruments and other electronic equipment.

The tensions around Iran’s nuclear program came up with renewed vigor in May after US President Donald Trump announced his withdrawal from the 2015 Iran nuclear deal.