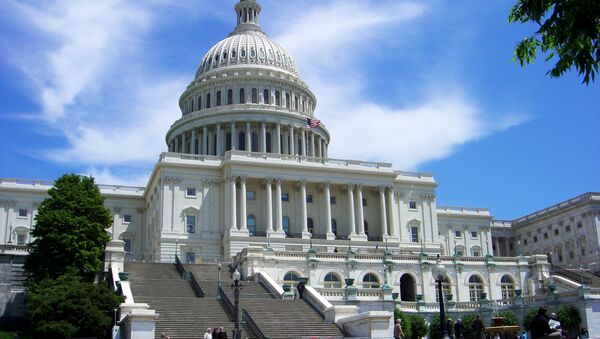 Frequent ‘Shootings, Robbery, Theft’: Beijing Warns Chinese Tourists in US
The rhetoric of violent retribution on Capitol Hill was ratcheted up several notches over the weekend after several lawmakers acknowledged threats of gun attacks by overzealous political observers in the US.

Lawmaker Waters has repeatedly called for the impeachment of US President Donald Trump, accelerating her demands following the implementation of a wildly unpopular White House ‘zero tolerance' border policy on undocumented immigrants that has seen thousands of children — many very small — forcibly separated from their parents and placed in detention cages.

The president, escalating the anger by tweeting that Waters was a person of "extraordinarily low IQ," reacted to her wounded animal reference by warning that she should "Be careful what you wish for," a remark seen by many in DC as a veiled threat implicitly giving permission to Trump supporters to use gun violence against the 79-year-old career Democrat, cited by The Hill.

After two additional immigration rallies in Arizona and Texas featuring Waters as a guest speaker were called off last week due to what security organizations regarded as a "very serious death threat," the lawmaker detailed ways in which Trump and his supporters contribute to the current climate of hate.

"As the President has continued to lie and falsely claim that I encouraged people to assault his supporters," she stated, "while also offering a veiled threat that I should 'be careful', even more individuals are leaving [threatening] messages and sending hostile mail to my office," cited by CNN.

Long noted as a supporter of ‘peaceful protest' as a means of cultural and political change, Waters — responding to increasingly polarizing actions and policies enacted by the White House — recently encouraged voters to face down Trump administration officials wherever they might be encountered.

Suggesting that Trump officials, whether seen "in a restaurant, in a department store, at a gasoline station," should be publicly called to account for Trump policies, Waters declared: "you get out and you create a crowd and you push back on them and you tell them they're not welcome anymore, anywhere."

000000
Popular comments
edover3, Re-phrase that. The US IS A MAD HOUSE. And a cesspit too boot

siberianhusky
2 July 2018, 00:40 GMT5
000000
now we are in the realms of intervention by psychiatrists - with drug therapies.
michael
2 July 2018, 00:02 GMT3
000000
Newsfeed
0
New firstOld first
loader
LIVE
Заголовок открываемого материала
Access to the chat has been blocked for violating the rules . You will be able to participate again through:∞. If you do not agree with the blocking, please use the feedback form
The discussion is closed. You can participate in the discussion within 24 hours after the publication of the article.
To participate in the discussion
log in or register
loader
Chats
Заголовок открываемого материала
Worldwide
InternationalEnglishEnglishMundoEspañolSpanish
Europe
DeutschlandDeutschGermanFranceFrançaisFrenchΕλλάδαΕλληνικάGreekItaliaItalianoItalianČeská republikaČeštinaCzechPolskaPolskiPolishСрбиjаСрпскиSerbianLatvijaLatviešuLatvianLietuvaLietuviųLithuanianMoldovaMoldoveneascăMoldavianБеларусьБеларускiBelarusian
Transcaucasia
ԱրմենիաՀայերենArmenianАҧсныАҧсышәалаAbkhazХуссар ИрыстонИронауОssetianსაქართველოქართულიGeorgianAzərbaycanАzərbaycancaAzerbaijani
Middle East
Sputnik عربيArabicArabicTürkiyeTürkçeTurkishSputnik ایرانPersianPersianSputnik افغانستانDariDari
Central Asia
ҚазақстанҚазақ тіліKazakhКыргызстанКыргызчаKyrgyzOʻzbekistonЎзбекчаUzbekТоҷикистонТоҷикӣTajik
East & Southeast Asia
Việt NamTiếng ViệtVietnamese日本日本語Japanese俄罗斯卫星通讯社中文（简体）Chinese (simplified)俄罗斯卫星通讯社中文（繁体）Chinese (traditional)
South America
BrasilPortuguêsPortuguese
NewsfeedBreaking
13:45 GMT'Three Civilians Killed in US Airdrop Operation' in Syria's Deir ez-Zor
13:21 GMTIraq Arrests Activists, Ministry Employee for Calls to Normalise Ties With Israel
13:20 GMTMali to Explore New Security Partnerships As France Ends Sahel Operation
13:18 GMTMerkel's Potential Successor Laschet Reveals His Vote Preference in Election Blunder
13:11 GMTWomen to Dominate Iceland's Parliament for First Time Ever, Reports Suggest
13:09 GMTBlast Kills Taliban Intelligence Officer in Eastern Afghanistan, Source Says
13:00 GMTGermans Head to Polls to Choose New Bundestag
12:51 GMTDozens of New Yorkers Stage Anti-Vaccine Protest at a Food Court Chanting F**k Joe Biden
12:41 GMTFour Inmates Dead, One Injured in Attempted Jailbreak in Philippines, Reports Suggest
12:40 GMTVirginia Giuffre to Reportedly Hand Prince Andrew Secret Doc Able to Defeat Her Lawsuit
12:37 GMTRussia Scrambles Three Su-35 Jets to Escort US B-52 Bomber Approaching Border in Pacific Ocean
12:32 GMTCyclone Gulab Likely to Make Landfall in India on Sunday Evening
12:21 GMTUN Chief Warns 'Humanity Unacceptably Close to Nuclear Annihilation'
12:09 GMTKremlin Says It Hopes for Consistency on Minsk Agreements From Germany After Merkel Leaves
12:02 GMTRussian Presidential Spokesman Says Gazprom Fulfilling All Obligations
11:54 GMTLabour Leader Says It's 'Not Right' to Say Only Women Have a Cervix
11:43 GMT'F**k Them': Carlson Responds to Yet Another Call to Fire Him Over 'Great Replacement' Theory
11:42 GMT'Piece of Scum': UK Labour Deputy Leader Lashes Out at Tories
11:14 GMTUK Transport Minister Calls on Britons to Behave Normally, Says There is No Shortage of Fuel
11:12 GMTHamas Has No Place in Sudan But Will It Give Up on Former 'Base'?