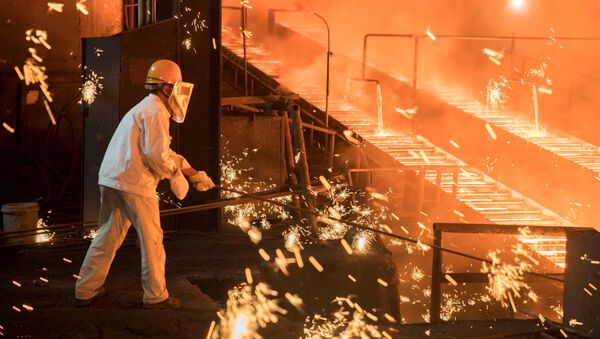 © REUTERS / Stringer
Subscribe
US President Donald Trump has imposed harsh tariffs on steel and aluminum coming from China, Canada, the EU and other states, prompting backlash from many of them in the form of counter-tariffs. The trade war has been especially harsh between China and the US, with the latter cutting the Asian country off from many of its technological products.

Sputnik has discussed the impact that the tariff spat is having on China's economy with Joel Trachtman, a professor of international law at the Fletcher School of Law and Diplomacy.

Sputnik: Do you think that this[US tariffs] is going to positively affect China, that it would benefit in the long run from other alignments, not just the pressure on American-Chinese trade relationship, but opening other opportunities globally?

Joel Trachtman: I think that the US-China relationship has been mutually beneficial over the past 20 or more years. And I think both countries will be hurt. China is actively seeking other outlets for its products, other trading relationships. It's working on its regional comprehensive economic partnership with the Asian countries and India and Australia. It's building the Belt and Road initiative to reduce infrastructural barriers to trade.

So, China is a trading country and it's recognizing reality. I think China, Canada, the EU, really all of the US trading partners, aren't buying this "art of the deal" strategy, where Trump says "I can hit you and you will back down." None of these countries are backing down. And so, I think we will see what people have been calling "trade war" until people get smart and decide that it's hurting everyone and stop doing it. And I think the US is beginning all of this.

Sputnik: What effect is this having on the economy of China? Is there some movement? Is it adversely affecting it? What is the current situation?

Joel Trachtman: There is no doubt that it will adversely affect China. China would like to maintain its trade ties to the US. They have been profitable. China is opening to the world; has lifted hundreds of millions of people out of poverty. But I think that China ready to take the necessary steps to deal with a world in which the US is a less open market.

It will be pain for everyone, as I said at the outset, but I think China will move on and find ways to substitute for market opportunities in the US. This can't be a sustained situation. So in the short term there will be a lot of trouble, but in the long term, I think, people will recognize that goods are more expensive, jobs are lost, investments become less valuable, the stock market drops and there will be increasing pressure in the US to change things.

000000
Popular comments
Donny says Canada is playing hardball on dairy. Ya. Canada’s huge 600 million dollar dairy industry is the game changer. That million not billion. On top of that other then stunned Americans who would want to consume America’s drug laced dairy.
Mitach2002
30 June 2018, 19:31 GMT1
000000
China's transitional capitalism may prove more flexible than the economic structures of any other country - including USA and its vassal-states. The world must wait - and watch.