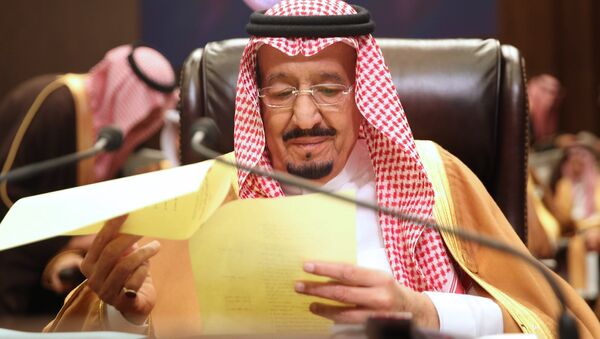 Donald Trump said on Saturday that he spoke to the Saudi king about the need to increase Saudi Arabia's oil production to two million barrels due to an unstable situation in Iran and Venezuela, stressing that King Salman bin Abdulaziz Al Saud agreed with the proposal.

Saudi King Salman and the US president in a phone call emphasized the need to preserve stability in oil markets and efforts of oil-producing countries to compensate for any potential shortages.

Oil prices raised this week after Washington said it would offer no extensions or waivers to Iran's oil buyers.

The Saudi statement does not mention the agreement to raise Saudi oil production cited in Trump's tweet.

The official Saudi Press Agency (SPA) also did not mention any agreements regarding the increase in daily oil output while reporting the telephone conversation between Trump and King Salman. According to SPA, the two officials discussed bilateral ties and reviewed the situation in the region and the world. The Saudi king and the US president also stressed the need to preserve the stability of oil markets, according to the media outlet.

Turkey Refuses to Meet US Calls to Curb Oil Trade With Iran
Iran's Oil Minister Bijan Namdar Zaganeh stated earlier that the US could not have imposed sanctions on the country's oil sector if Iranian crude exports had increased up to 4 million barrels a day.

Earlier in June, the White House threatened to penalize countries that fail to refrain from purchasing oil from Iran by November 4.

Turkey and India, the biggest importers of Iranian oil, promptly slammed the motion, emphasizing that they won't abide by the US' calls.

The Organization of the Petroleum Exporting Countries (OPEC) and non-cartel producers initially reached an agreement at the end of 2016 to reduce oil output by 1.8 million barrels per day compared to October 2016. The deal, aimed at boosting oil prices, was prolonged twice, with the most recent extension set to last until the end of 2018.

Last week, OPEC and other oil producing states participating in the cut deal agreed to increase production to 1 million barrels per day during a meeting in Vienna.

The Saudi decision comes amid a decline in Iranian oil exports due to US sanctions and the continuous decline in oil production in Venezuela due to economic crisis.

Washington also plans to ask China and India to cut off their imports of Iranian oil before Washington imposes sanctions against Tehran in November, according to a senior State Department official.