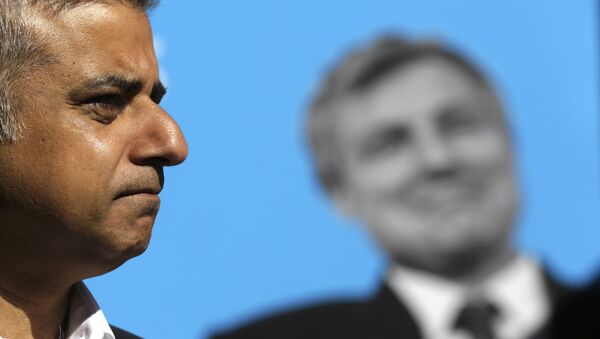 The co-founder of the right-wing English Defence League, Tommy Robinson, was sentenced for violating courtroom reporting rules because he streamed a closed process.

A speech by London Mayor Sadiq Khan at the State of London Debates on June 28 was abruptly interrupted several times by supporters of Tommy Robinson, the co-founder of the right-wing English Defence League (EDL), who reprimanded Khan over safety issues on the city's streets.

One of the protesters shouted that terrorism is not "part of living in a big city" and that US President Donald Trump would be more welcome in London than Khan. He also started chanting Robinson's name with many attendees of the meeting joining in the chorus.

Another man, wearing a "Trump" t-shirt accused the London mayor of being a "jihadist." He was removed by security, but that didn't stop the wave of criticism directed at the mayor.

When Khan resumed his speech, talking about his efforts to ensure security on London's streets, another protester labeled his words "bullsh*t." The distressed participant, while commenting on the mayor's claims that the key problems facing the London police were lack of funding and personnel shortages, angrily suggested he add "corruption" to the list.

Tommy Robinson (whose real name is Stephen Yaxley-Lennon), the co-founder and the former leader of the anti-immigrant EDL was arrested on May 25 and accused of breaching the peace outside Leeds Crown Court by using social networks to stream an hour-long video of the process outside the courthouse. He was summarily sentenced to 13 months in prison.

Robinson's supporters have organized an online petition to get him released from prison, which to date has already gathered over 627,000 signatures. The petition explains that he was sentenced for "reporting on Muslim grooming gangs" and "informing the public of all the wrongs committed in the name of Allah."