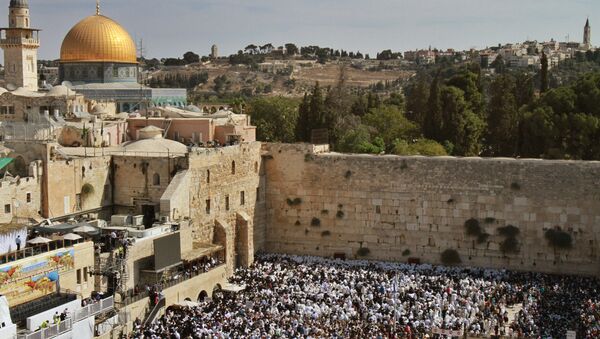 The model rose to prominence last year when she was jailed in Egypt together with her photographer after posing for a series of nude snaps at the Luxor temple complex.

Marisa Papen found herself at the epicenter of a scandal after she peeled off for last month’s photoshoot at Jerusalem’s Western Wall, also known as the Wailing Wall, the holiest place for Jews.

She has no Instagram, but shared the pictures and the story behind those photos, headlined “The Wall of Shame,” on her personal blog. Judging by the prelude to the gallery of images, she expected to receive a lot of negative feedback and angry comments.

“First of all, ‘don’t judge a book by its title’… This purely implies the shame you, dear reader, (perhaps) will project on me because I have done something so disrespectful, I should burn in hell.  I know my mailbox is about to fill up with threats and angriness again — to all the people typing down their furiosity right now, save your energy. I don’t even open them,” she wrote.

Speaking with The Sun Online, the Belgian model confessed that she and her family had received death threats over the controversial shoot.

“My mailbox and Facebook page have been full of threats after this. I’m not afraid, that’s what I told the photographer: ‘I’m ready to die for my art. Obviously I’m trying not to but for me it is my life and my goal to spread my message of freedom.”

Her family was afraid that she would be attacked over the photos:

“So if one day some crazy guy wants to kill me for what I’ve done then so be it. My friends and my family especially were asking me ‘what have you done? They’re going to come and kill you!’”

Despite all the fury she’s sparked, she admitted to having received a lot of positive comments too:

“My favorite comment so far, because I’ve had a lot of negative responses like death threats and everything, was from an Israeli guy. He said: ‘If God didn’t want this photo to be taken the chair would have broken.’ Because the chair is bending really far back in the picture but didn’t snap.”

#Nudism, cuz ure #God aint like it 😏 Belgian Model Poses Nude in Front of Western Wall as Part of Art Exhibition The model #MarisaPapen was previously detained in Egypt after posing naked in front of religious site.

She said that the photoshoot wasn’t planned and took place ahead of the 70th anniversary of the state of Israel, which she “got to celebrate in my birthday suit.” Both Marisa and the photographer were “overwhelmed by the energy and everything that was going on in Jerusalem.”

“It felt like a higher message or a higher power took care of everything and we had to take the picture. The fact that nobody saw us and it was so easy to take that photo, for me it was proof that it had to be taken,” she said.

Social media users condemned her for explicit photographs in a holy place and her “disrespectful” behavior:

I hope Marisa Papen is banned from entering Israel 🇮🇱 #MarisaPapen is not only disrespectful but also stupid. Does she think she’s showing something that no other woman has??
The only boundary she’s pushing is how low can her IQ go.

Hey @MarisaPapen It's disrespectful. What an ignorant & entitled c-word. You don't have to be religious to respect a historic place. Your tits and ass are not art when all you want is attention.
BBC News — Nude model's Western Wall photo shoot sparks anger https://t.co/Ap3GIuo1zp

How disgusting and disrespectful, I'm appalled by her attitude and she didn't think on the impact it could have, but only being attention seeking which makes herself look like a tart. 😲

Last year, Papen was held in an Egyptian prison for 24 hours together with her photographer for taking nude photos in a temple complex in Luxor.