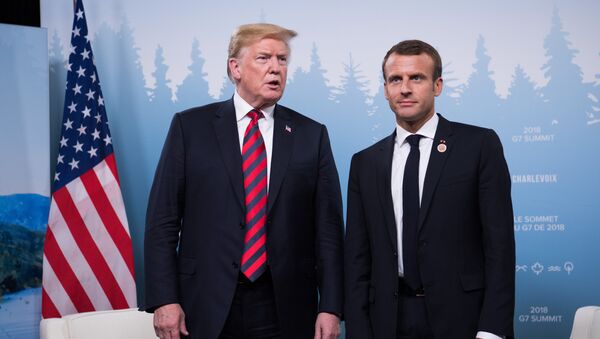 According to The Washington Post, Trump suggested France leave the EU in talks with Emmanuel Macron.

When asked to comment on the Washington Post's report, claiming that US President Donald Trump offered his French counterpart a lucrative bilateral trade deal if Paris agreed to withdraw from the EU, President Emmanuel Macron stated, "What was said in the room, stays in the room."

According to the newspaper, citing European officials, during his April 24 meeting with Macron at the White House, Trump told him: “Why don’t you leave the EU?”

He then offered France a bilateral trade agreement with “better terms than the EU as a whole gets from the United States.”

'Not Forever': How Macron's Bromance With Trump Turned Into Offense
President Trump also reportedly told Macron that the European Union is “worse than China” on trade.

The White House declined to comment on the Washington Post’s reports, but did not dispute the account.

The details of President Trump’s April 24 meeting with Macron come amid fears of a looming trade war following Washington’s move to impose steep tariffs on steel and aluminum imports from the EU, Canada and Mexico.

READ MORE: Where Might Prevails: US Wants to Unravel WTO — EU Memo

In March, the United States introduced a 25 percent tariff on steel imports and a 10 percent levy on aluminum imports.

EU countries responded to Washington’s move by slapping a 25 percent tax on 2.8 billion euros’ worth of US-made goods.