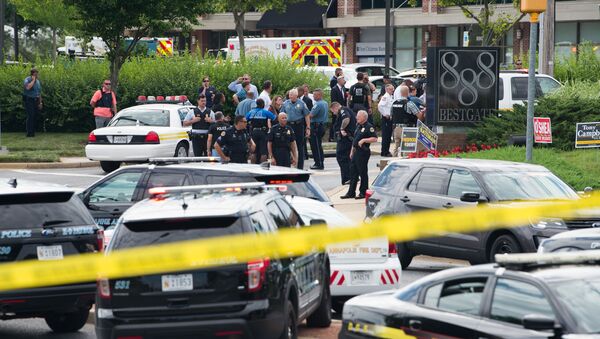 © AFP 2021 / SAUL LOEB
Subscribe
The suspect in the deadly shooting at a newspaper office in the US state of Maryland will be held with bond, Anne Arundel County State's Attorney Wes Adams said in a press briefing on Friday.

"Jarrod Ramos was just held without bail after a hearing," Adams told reporters. "The next step in this process is either a preliminary hearing or bringing the case before a grand jury for an indictment. Either of those things will occur within the next 30 days."

Adams also specified that the suspect used a pump-action shotgun.

"I will also confirm it was a pump-action shotgun. It was legally purchased a year or so ago," Altomare told reporters.

Ramos is accused of shooting and killing five people on Thursday inside the offices of the Capital Gazette in the city of Annapolis. Earlier in the day, police stated that Ramos has a long, criminal history.

The police managed to take the suspect into custody and now he has been charged with five counts of first-degree murder for the killings inside Maryland's Capitol Gazette office.

A CNN broadcaster has reported that the suspect identified as Jarrod Warren Ramos, 38, is scheduled to have a bail hearing at 10:30 a.m. local time (2:30 p.m. GMT).

A man armed with smoke grenades and a shotgun attacked journalists at a newspaper in Maryland’s capital, killing five people before police quickly stormed the building and arrested him, police and witnesses said. Police said the suspect was a white man in his late 30s whose… pic.twitter.com/K4EjwHrIMo

Jarrod W. Ramos has been harassing the journalists from the Gazette for years on social media and even sued the outlet for defamation.

Rob Hiaasen, 59, Wendi Winters, 65, Rebecca Smith, 34, Gerald Fischman, 61 and John McNamara were shot and killed. All of them were journalists except for Smith who was a sales assistant, police said.

Shooting Reported At Maryland Building Housing Local Newspaper
Over 170 people were evacuated from the building, many of whom were later interviewed as witnesses.

The United States has recently been hit by mass shooting incidents at schools, offices, and public venues.

In February a gunman shot and killed 17 students at a high school in southern Florida, less than six months after a mass shooting at a concert venue in Las Vegas, Nevada that left 58 people dead.