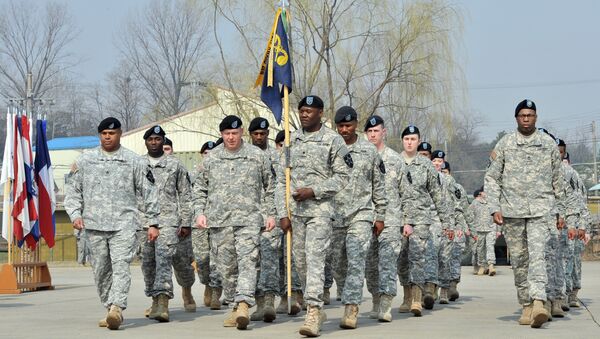 Washington’s decision to move the US military garrison from central Seoul to a new headquarters farther away from the country’s border with North Korea comes in the wake of a thaw between the parties, following the Trump-Kim meeting and the US move to halt joint drills with South Korea.

Friday’s relocation of the US garrison from central Seoul to Camp Humphreys, located about 70 kilometers (45 miles) south of Seoul, formally ends seven decades of US military presence in the South Korean capital and shuts another chapter in the Cold War legacy as the two Koreas are looking for ways to mend fences after years  of animosity and mutual threats.

World
US to Keep Current Number of Troops in South Korea – Defense Secretary
Located in the country’s western port-city of Pyeongtaek near a  US air base, the sprawling $11 billion command headquarters is the largest such base outside the United States.

"In opening a new era of the US forces headquarters in Pyeongtaek, I hope that the US-South Korea alliance will develop beyond a 'military alliance' and a 'comprehensive alliance' and become a 'great alliance,'" Moon said in a statement.

The relocation comes as part a US plan to  move its its 28,500 troops and their bases in South Korea out of highly populated areas and away from the hundreds of North Korean artillery guns targeting the Seoul metropolitan area.

The US military had been headquartered in Seoul's central Yongsan district since American troops first arrived on the peninsula at the end of World War II.

Relations between the two Koreas have recently been showing signs of warming up with North Korea’s Kim Jong-un and South Korea’s Moon Jae-in holding an historic summit in April and signing a joint declaration to support international efforts aimed at ridding the Korean Peninsula of nuclear arms and proceeding with reunion programs for separated Korean families.