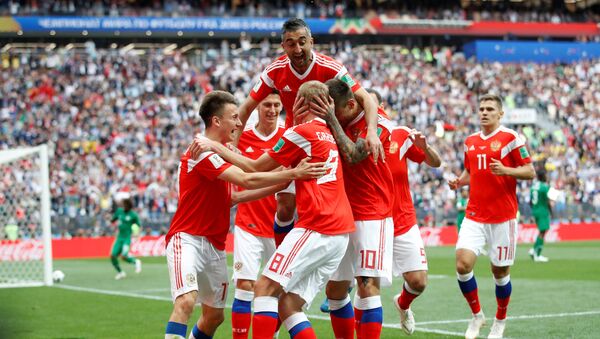 MOSCOW (Sputnik) - CEO of the Russia 2018 Local Organizing Committee Alexey Sorokin said on Friday that he was not surprised by the way the team played at the FIFA World Cup, and advancing to the knockout stage satisfied everyone.

"We are not surprised, we are simply happy that we advanced to the knockout stage… We believe in our team. If you ask, yes, they were tested for doping multiple times, results are known. We want the team to participate in the tournament for as long as possible," Sorokin said.

Russia finished second in their group and advanced to the knockout stage of the World Cup for the first time in history. The host nation will face Group B winners Spain at Moscow’s Luzhniki Stadium on Sunday.

Meanwhile, FIFA Competitions and Events Director Colin Smith said on Friday that all the interested parties are satisfied with the FIFA World Cup in Russia.

"We are very glad about the way the World Cup is being held. Russia holds an amazing event. Absolutely all the sides have a favorable impression of hotels, base camps, arenas, spectators' support. The media also give a positive feedback, all the interested parties are satisfied," Smith told journalists. 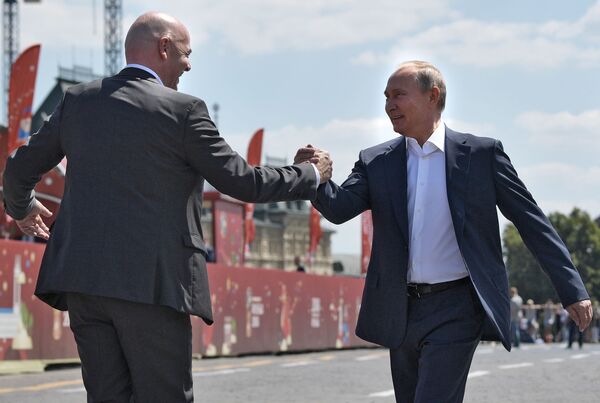 The head of the Organizing Committee that the success of the 2018 FIFA World Cup in Russia could be accounted for the high-quality work of the security system.

"We always emphasize that we have a very strong security system that involves… all the country's competent agencies. There has not been a single incident, not even a hint of an incident… As for the terrorist threats, it's not up to me to comment, I don't have such information. I can tell you that the success of the tournament is largely accounted for the high-quality work of the security system," Sorokin said.

Sorokin noted that Russians have shown that they were happy to welcome football fans from any country.

"I think, we have undoubtedly shown the entire world that we are glad to welcome fans from any country. The atmosphere is very hospitable, I would say, hearty here. Let the UK ministers come, we will welcome them as our guests. We are perplexed with the decisions of some politicians, but if they come, we will be happy to see them," Sorokin told journalists.

The Local Organizing Committee's CEO concluded that positive emotions from the World Cup visitors are the best way to evaluate the organization of the tournament.

"[We are] satisfied with the way the tournament is going, [we] see [positive] emotions from our guests, it is the best evaluation. There is neither the criticism of infrastructure, nor of pitches, or arenas, everything is working well. Four cities have already finished hosting matches, it's a little sad, but the tournament is going on," Sorokin said.

He went on saying that "the numbers were incredible,” with over 1.5 million FAN IDs had been issued for the period of the World Cup, 750,000 of them had been awarded to non-Russian residents.

A FAN ID is a personalized document which is obligatory for everyone who has a ticket to any of the games of the upcoming tournament. It provides holders with a visa-free entry to Russia during the World Cup, with fans being able to enter the country 10 days before the first match and stay until 10 days after the last game.

"We are especially grateful to the volunteers, they are our face, and they receive positive responses. We have a total of 17,040 volunteers working at 153 facilities," he said.