Theresa May Receives Ultimatum From Brussels as Negotiations Near Final Stage 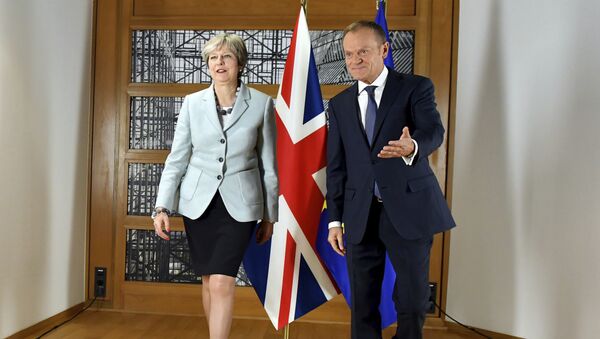 Britain is set to leave the European Union in March 2019, with all of the key sticking points in the negotiations still to be resolved months away from the projected end of the negotiation process.

EU leaders have used the British Prime Minister's presence at the EU migration summit in Brussels to warn that the lack of progress in Brexit talks between the two sides is threatening to deliver a "no deal" scenario that would crash the UK out of the EU and see it adopt WTO tariffs in trade.

Donald Tusk, the head of the European Council used the summit's press conference to warn that the most fundamental issues between the two sides remain unresolved. In a blunt warning to Mrs. May, he said the current round of negotiations were "the last call to lay the cards on the table."

Donald Tusk's blunt message to Theresa May on Brexit: "This is the last call to lay the cards on the table" #EUCO

Donald Tusk's 2-sentence warning to Theresa May on Brexit: "The EU27 has taken note of what has been achieved however there is a great deal of work ahead and the most difficult issues still need to be resolved.

"This is the last call to lay the cards on the table."

The EU's Chief Negotiator Michel Barnier in particular singled out the persistent problem of the Northern Irish border, which all sides have said they oppose becoming a hard frontier but have so far failed to agree on how such a situation can be prevented.

Macron: 'We Can No Longer Wait' on Brexit
Migration also remains an intractable sticking point, with Britain demanding an end to freedom of movement between itself and the continent, while the EU grapples with itself on the issue to formulate a new policy among its 27-remaining member-states.

Both sides have professed a desire to conclude the negotiations by October of this year, with Theresa May coming under increasing pressure from her party members to allow the Conservative Party and Parliament to take a more active role in the process if sufficient progress is not made by then.