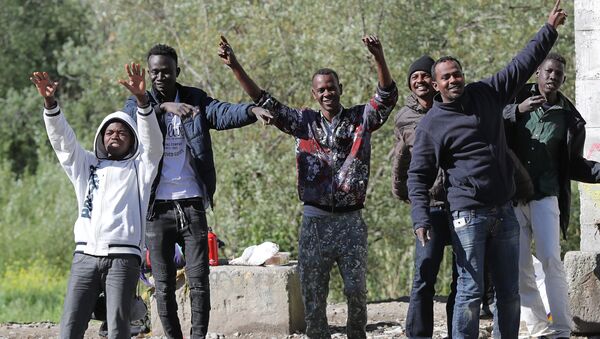 "My proposal to the minister is to strengthen control in the city in order to reassure citizens. And those who live in the reception center should get up in the morning, and do community works from 9 to 13. They cannot be idle from morning till night. If these people take care of parks and lawns, for example, and if the citizens feel safe, it will be a different story. We are Catholics, not racists," the official told Sputnik in an interview.

Chiappori added that he has not yet received an answer to his letter. The official is also concerned with the problem of new arrivals who are coming back to Italy after France closed its borders. According to Chiappori, France does not fulfill its obligations on migration and sends refugees back to Italy.

"Some of the migrants wait for the chance to cross the French border; meanwhile they do nothing for the whole day, idling away with their earphones and backpacks in the city which already has serious problems. Almost every day, residents ask me, as a mayor [of Diano Marina], why we pay them 35 euros a day, while those who have worked all their life for the sake of Italy receive 400-euro pensions. This is the leitmotif of the citizens' mood," Chiappori said.

The migrant crisis is one of the key topics of the two-day EU summit which is underway in Brussels.

Italy, which has been on the front line of the refugee arrivals for years, wants concrete measures on migration and might veto the decision of the European Council on the matter if unsatisfied with the results, as the country's Prime Minister Giuseppe Conte said ahead of the summit.