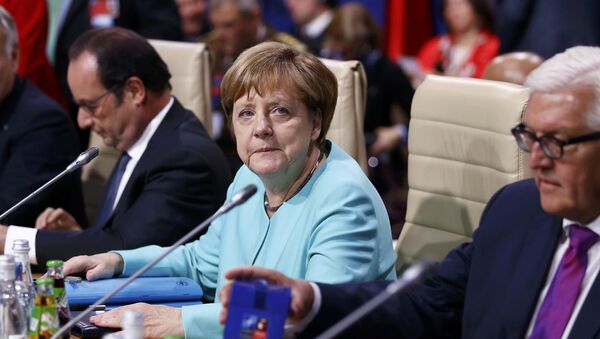 MOSCOW (Sputnik) - Right-wing Alternative for Germany (AfD) is the only party in the German Bundestag that backs demands for substantial increases in the country's military spending in the coming years to stave off further deterioration of the state of the national armed forces, Joerg Meuthen, the co-chair of the party, told Sputnik.

"The majority of German lawmakers, such as Greens and Leftists, are opposed to higher spending due to ideological reasons. The rest of the members of the Bundestag either lacks the political will or has its fiscal preferences on migrants and welfare. Only the AfD has always underlined the importance of a fully operational Bundeswehr [Germany's armed forces]," Meuthen said.

According to the politician, the poor condition of the Bundeswehr is a result of the government's decades-long policies, which have "systematically and increasingly neglected appropriate financial support for the German military forces to the detriment of Germany’s safety." Specifically, he referred to the extreme budget cuts.

"Besides, the recent suspension of compulsory military service shows clearly a diminishing esteem for our forces within politics and society. I do not consider the German armed forces to be able to cope with the future challenges at the moment," he added.

Commenting on the German chancellor's pledge in mid-June to reach the target of spending 2 percent of the GDP on defense, in line with NATO standards, in the coming 10 years, the AfD co-chair expressed doubt that this could be realized.

"I am afraid with Angela Merkel in charge, we will not see a fundamental change of the current insufficient condition of the Bundeswehr," he said.

READ MORE: May to Reportedly Face Off With Defense Sec. Over Boost in UK's Military Role

World
US to Keep Current Number of Troops in South Korea – Defense Secretary
Eugen Schmidt, an AfD member, told Sputnik that Bundeswehr's problem is not only the underfunding but also the "absolute incompetence" of its Minister Ursula Gertrud von der Leyen, who is a doctor by profession.

"Unfortunately, coming to an end, the era of Merkel's rule was marked by appointing ministers solely on the basis of loyalty and personal devotion to Chancellor Merkel, thus leading to the degradation of the ministerial performance," the politician said.

According to Schmidt, the defense minister is busy conducting seminars on sexual minorities in the Bundeswehr, presenting uniforms for pregnant servicewomen and lobbying for female quotas in the army instead of modernizing the military equipment.

"Naturally, the credit of such a defense minister is that planes in Germany do not fly, guns do not fire, tanks are immobilized, and soldiers are preoccupied with the issues of sexual orientation," Schmidt concluded.

Speaking in Washington during a meeting with US Defense Secretary Mattis on June 20, German Defense Minister Ursula von der Leyen said Germany was committed to increasing its defense budget. Mattis, in turn, praised Germany's contribution to NATO and its plans to increase its defense budget.

Germany's military spending, which stood at 1.24 percent of GDP last year, has been a point of contention between Berlin and Washington, which demands that allies raise their respective defense expenditures. Germany's constitutional limits on the military, created in the postwar era to prevent a repeat of Nazi crimes, is often cited as the reason against military spending.