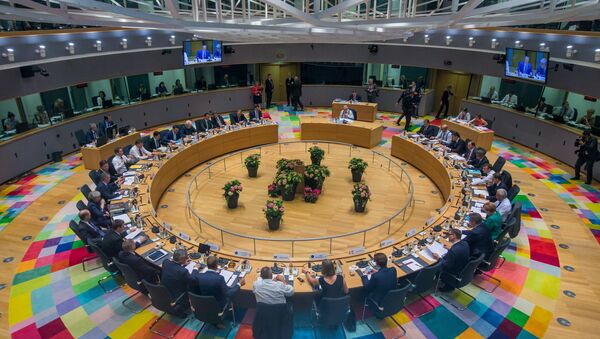 BRUSSELS (Sputnik) - EU leaders have agreed to extend the bloc's sanctions against Moscow during the two-day European Council session, which concluded in Brussels earlier in the day, Irish Prime Minister Leo Varadkar said on Friday.

Earlier in the day, emerged media reports claimed that the EU leaders had agreed to prolong the sanctions. A source familiar with the discussions at the meeting told Sputnik that the council decided to extend the anti-Russia restrictions for the next six months, a decision that was made after a short discussion about the Ukrainian crisis and the Minsk peace accords.

"The decision was made to continue the sanctions against Russia," Varadkar told a press briefing after the summit.

According to a letter published by European Council President Donald Tusk ahead of the meeting, the summit's agenda included German Chancellor Angela Merkel and French President Emmanuel Macron reporting on the implementation of the Minsk agreements, which were drawn up in 2015 by the leaders of Ukraine, Russia, Germany and France with the goal of resolving the Ukrainian crisis.

READ MORE: EU Has No Aggressive Policy Toward Russia — Macron

US Sends Signal to Moscow by Halting Aid to Rebels in Syria – Israeli Analyst
The economic sanctions against Russia were initially introduced by the European Union in 2014 over Moscow's alleged destabilization of the situation in Ukraine. In 2015, the bloc linked sanctions relief with the full implementation of the Minsk accords.

The restrictions have been repeatedly prolonged, with the latest instance extending them until July 31.

Moscow has repeatedly denied the allegations of meddling in the Ukrainian conflict. Russia has also criticized the EU move to make sanctions relief conditional on the implementation of the Minsk agreements, reiterating that it was not a party to the conflict.