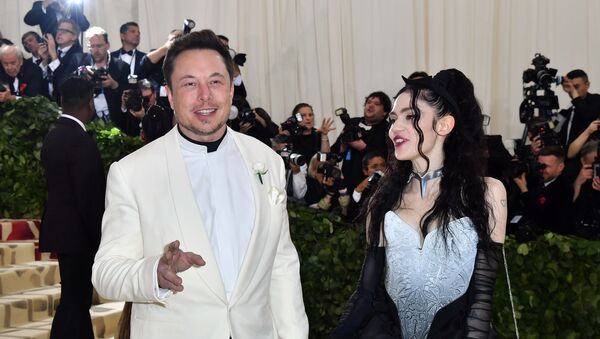 Canadian singer Grimes left a comment under her Instagram-post in which she congratulated her boyfriend business tycoon Elon Musk on his birthday. The post left many users confused.

Grimes wrote a message to Musk in Russian calling him "her demon." Her choice of language surprised Russian social media users.

The singer added an emoji of a black heart and a flying saucer.

Social media users were left debating the unusual post with one user suggesting that it must have been Russian “hackers” that entered Grimes brain and wrote in Russian.

​"grimes for a long time already has shown interest in Russian"

Although there is no explanation why she wrote her post in Russian, her knowledge of Russian comes as no surprise. In 2012, Grimes said in an interview with the publication Exberliner that she spent her childhood with her grandmother, who was Ukrainian and is therefore familiar with the Russian language.

Musk Madness: People Are Already Wreaking Havoc With Elon’s Flamethrowers
That same year, the singer released an album called Visions, which contained a quote on the cover from a poem written by Russian poetess Anna Akhmatova called "Song of the last meeting." The cover was designed by Grimes herself.

In early May of this year, the head of Tesla and Space X, Elon Musk, visited the charity event Met Gala, where he appeared in the company of Grimes.

Grimes had said this was the first time in three years that anyone understood the joke, as they were both poking fun at AI.