Pentagon Asked to Provide Housing for Immigrant Families of Up to 12.000 People 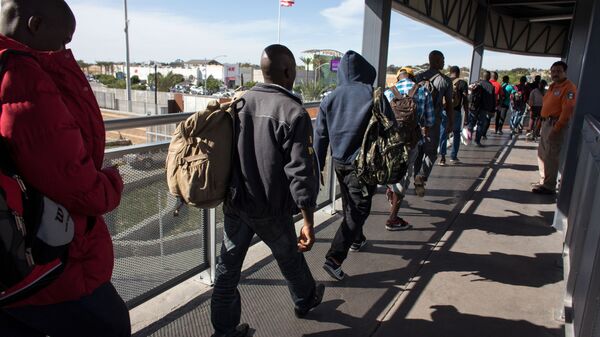 © AFP 2023 / Guillermo Arias
Subscribe
International
India
Africa
WASHINGTON (Sputnik) - The US Defense Department was asked by the Department of Homeland Security (DHS) to identify and/or construct migrant family facilities near the US-Mexico border to accommodate up to 12,000 people.

Pentagon reported it has been asked by DHS to provide capacity to house 2.000 immigrants in next 45 days. The department of defense said that if facilities are not available, it has been asked to construct semi-separate camp facilities to provide house and care for immigrant families at three locations, preferably in Texas, Arizona, New Mexico or California.

Immigrant Parents Describe Hardships Under Trump's 'Zero-Tolerance' Policy
"The Department of Defense has received a request for assistance from the Department of Homeland Security to house and care for an alien family population of up to 12,000 people," the release said on Wednesday. "DHS requires the requested capacity to house 2,000 people within 45 days. A timeline will be developed to add additional capacity."

The Trump administration has been criticized for its "zero-tolerance" immigration policy, which resulted in nearly 2,000 immigrant children being forcibly kept apart from their parents, who crossed the US border illegally, according to the Department of Homeland Security.