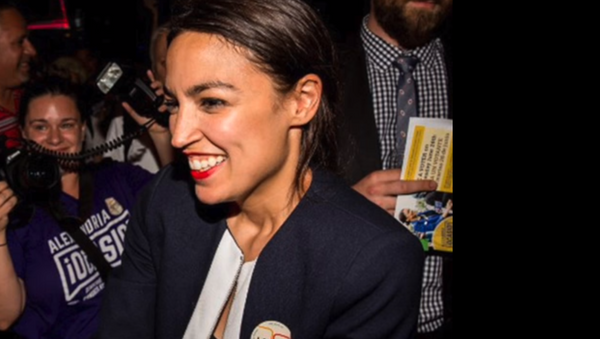 https://www.spreaker.com/user/radiosputnik/ocasio-cortez-defeats-top-ranking-congre
day that is widely viewed as one of the most shocking upsets for a Democratic incumbent in more than 10 years.

​Crowley is the fourth-ranking member of the House Democratic leadership and ran unopposed in his last seven races. Despite spending more than $1.2 million compared to Ocasio-Cortez's $128,000, Crowley could garner only 42 per cent of his constituents' votes.

In an interview on MSNBC's "Morning Joe" TV show Wednesday, Ocasio-Cortez said that she wants her campaign to counter US President Donald Trump's controversial policies instead of pick Twitter fights with him.

"What we need to do is lay out a plan and a vision that people can believe in, and getting into Twitter fights with the president is not exactly, I think, where we're going to find progress as a nation," she said.

During her campaign, Ocasio-Cortez, who is Puerto Rican and a member of the Democratic Socialists of America, advocated for universal healthcare, a federal jobs guarantee and the eradication of controversial laws by the US Immigration and Customs Enforcement (ICE).

Last Wednesday, Trump signed an executive order purportedly designed to prevent the separation of children from their parents when they are apprehended for illegal border crossings. The move followed leaked videos and images of crying kids locked in cages, which sparked outrage across the political spectrum and drew international opprobrium.

However, the "zero-tolerance" policy remains in place. Trump's order directed Attorney General Jeff Sessions to seek changes in what is referred to as the "Flores" settlement agreement in order to detain children longer. Flores v. Reno was a 1997 Federal court ruling that sharply limited the amount of time immigrant children can be placed in detention, a limitation that forms the basis for the government's present policy of separating them from their parents and categorizing them as "unaccompanied immigrant children."

However, according to Lindorff, Ocasio-Cortez's win really isn't all that surprising.

"I think people in the streets of Brooklyn, New York, were well aware that something big was going to happen. I think at times the gilded cage in Manhattan doesn't have a good sense of minority communities," Lindorff told hosts John Kiriakou and Brian Becker.

Lindorff noted the importance of her running on a platform explicitly opposing House Minority Leader Nancy Pelosi (D-CA), saying, "it's a big deal."

"I think something else is afoot, which should be alarming to Republicans in general, but also alarming to establishment Democrats," Lindorff told Radio Sputnik.

"And that is that this particular election with Ocasio-Cortez winning [signifies] the rise of the Puerto Rican vote. She is Puerto Rican and most Hispanic voters in New York are Puerto Ricans for the simple reason that they are all citizens. Around 100,000 Puerto Ricans moved north because of Hurricane Maria and they are all embittered by what everyone knows is the complete neglect of Puerto Rico by both both parties," Lindorff noted.

New York's 14th Congressional District, where Ocasio-Cortez is running, includes the eastern Bronx and part of north-central Queens. Its population includes large numbers of Latino, South Asian and other minority voters, Politico reported Wednesday. According to 2016 census data, about 50 percent of the district population is Hispanic.

"Puerto Ricans are really angry. And they're not alone, Hispanics in general are all upset because of immigrant issues and the fascist ICE actions. This victory is a rising of Latino anger, which is unregistered in the same way that Trump's victory was unanticipated, and will likely show up in the 2018 elections and beyond," Lindorff added.