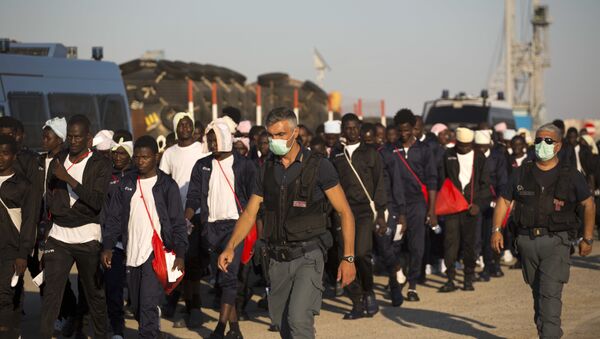 © AP Photo / Emilio Morenatti
Subscribe
International
India
Africa
MOSCOW (Sputnik) - The European Union should take only a small number of migrants and resettle them across the bloc if it is impossible to set up camps in North Africa, Paolo Grimoldi, the secretary for the Lega party in the northern Italian region of Lombardy, told Sputnik on Thursday.

"We want to arrange camps outside the EU. If arranging those camps in North Africa is not possible at the moment, the only solution is to take a small number of migrants which would be relocated throughout the European Union. The era when Italy was excepting numerous illegal migrants is over," Grimoldi said.

The lawmaker added that Rome would be willing to veto the resolution of the ongoing European Council. Italian Prime Minister Giuseppe Conte confirmed to reporters earlier in the day that Rome was prepared to block the decision of the European Council on migration if it was unsatisfactory.

Interior Minister Matteo Salvini has told Rossiya 24 broadcaster that Italian Prime Minister Giuseppe Conte would sign only concrete proposals on migration, and if no solution was found, Italy might question the size of the contributions it was paying to the European Union.

"We finally have Minister Matteo Salvini, who is asking the EU members to share the burden instead of closing their borders. I hope that the summit can mark the change in the EU migration mentality but, unfortunately, I am not very confident," Gianluca Savoini, another Lega party member and the president of the Lombardia-Russia Cultural Association, told Sputnik.

Italy presented its plan, the European Multilevel Strategy for Migration, at an unofficial meeting held in Brussels this Sunday. The draft document called on all EU states to help accommodate refugees and migrants, instead of placing the burden on the countries through which new arrivals enter the territory of the European Union, such as Italy and Spain.

Rome suggested boosting cooperation with countries of origin and transit of migrants and setting up centers there to process asylum demands and provide legal aid. Italy insisted that the obligation to rescue migrants at sea should not translate into the obligation to process migrants' and refugees' asylum requests.