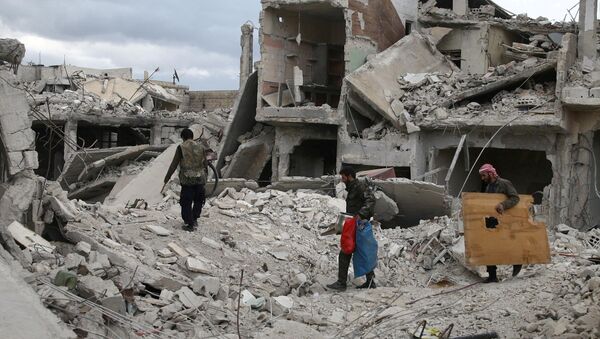 With two Israeli missile having struck targets near a Syrian airport on Tuesday, Rick Sterling, an investigative journalist and member of the Syria Solidarity Movement, told Sputnik that the likelihood of Israel backing down from its attacks are pretty slim.

As Sputnik previously reported, the Israeli Air Force was attempting a late night attack on an Iranian cargo plane that was unloading at Damascus International Airport. Footage has since emerged allegedly showing the aftermath of the Israeli strike.

The incident follows multiple strikes by Israel in recent months in what it calls "retaliatory" measures against Iran's presence in Syria, which it sees as a threat to its safety. Iran has had a foothold in Syria since the conflict first began in 2011.

​Sterling told Radio Sputnik's Loud & Clear on Tuesday that the missile launch proved that Israel has no intention of helping solve the Syrian conflict, but instead hopes to keep the fight going.

"I think Israel is continuing to provoke the situation," Sterling told show host Walter Smolarek. "They don't want to see the conflict end, they want to prolong the bloodshed there and prevent the Syrian government from finally defeating terrorism there in Syria."

"They've acted for many years now as a protectorate of the terrorist groups… they've been actively involved in the conflict from the get-go… they've medically treated terrorists inside Israel and with [Israeli Prime Minister] Benjamin Netanyahu going along bedsides, with videos showing him greeting medically treated extremists," Sterling pointed out.

Highlighting Israel's love of proclaiming Iran as a threat, the journalist stressed that the 70-year-old country has repeatedly cried wolf on the matter.

"Israel uses Iran as a pretext… they always claim that they're attacking armaments headed for Hezbollah or armaments from Iran or Iranian contingents," he told Smolarek. "They've exaggerated the Iranian participation in the conflict from the start."

"It is a dangerous situation right now. We don't know what the calculations in Israel are and it's pretty hard to predict what the US is going to do — there's competing wishes within the US military, CIA and the national security establishment," Sterling noted.

Predicting the media coverage to come on the matter, Sterling suggested outlets would ultimately create "sensational claims and fears about civilians being attacked and civilians being targets and very horrible events about to happen."