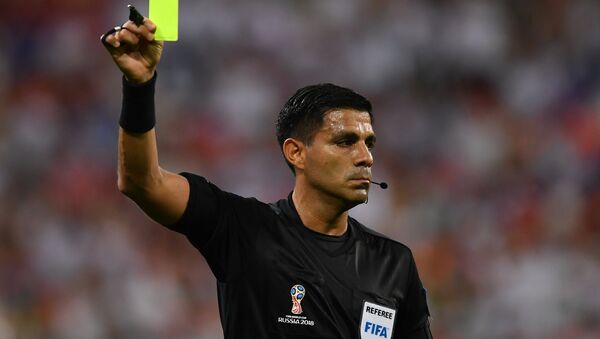 They might not be the center of media attention during the World Cup, but as soon as their whistle goes off during any match, all eyes are on them - the referees.

FIFA have selected 36 referees, 63 assistant referees and 13 Video Assistant Referees (VAR) for the World Cup. The FIFA championship in Russia is the first World Cup where video replays will be used, helping referees to preside over 64 matches.

The full list of FIFA 2018 World Cup referees can be seen here.

During the three years leading up to the tournament, referees were prepped "on fair play, protecting players and the image of the game, as well as consistency and uniformity." FIFA have selected a number of officials who underwent VAR courses at a technical centre of the Italian Football Association in Coverciano, Italy.

World Cup referees have been chosen from a pool of six football confederations under FIFA. The European governing body UEFA have 10 representatives. Interestingly, England has no referee representation at the tournament, for the first time in the post-war history. 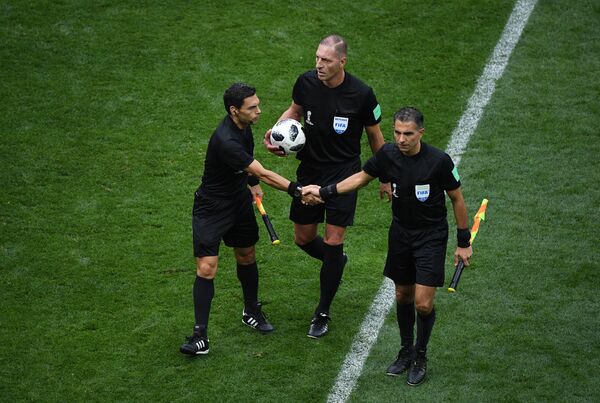 Referees shake hands during the World Cup Group A soccer match between Russia and Saudi Arabia at the Luzhniki stadium in Moscow, Russia, June 14, 2018.
© Sputnik / Alexander Vilf
/
Go to the photo bank

The choice, according to FIFA, was based on "each referee's skills and personality, as well as his level of understanding of football and ability to read both the game and the various tactics employed by teams."

Disagreements on the Pitch

Rarely would a World Cup referee have their decisions undisputed by the players, coaches or fans. Introduction of Video Assistant Referees (VAR) has also added fuel to the football pitch fire.

An international football referee Enrique Caceres from Paraguay caused uproar among Portugal's supporters, during the match Portugal vs Iran. Holding the post of a FIFA referee since 2010, Caceres stopped the game three times for VAR reviews, awarding one penalty to each side and gave the Portuguese star player Cristiano Ronaldo a yellow card, which some said was uncalled for, as opposed to the Iranian players, demanding removal of Ronaldo. 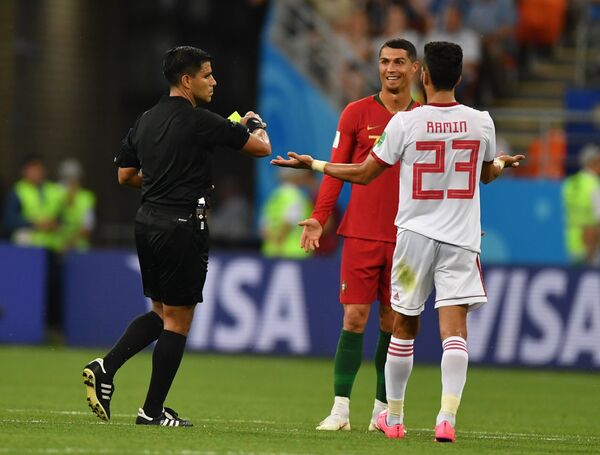 Referee Enrique Caceres shows a yellow card to Portugal's Cristiano Ronaldo during the World Cup Group B soccer match between Iran and Portugal at the Mordovia Arena, in Saransk, Russia, June 25, 2018.
© Sputnik / Mikhail Voskresenskiy
/
Go to the photo bank

Cesar Arturo Ramos, the only Mexican center referee assigned for 2018 FIFA World Cup, has been a full international referee since 2014. He has been presiding over Brazil's first match of the tournament against Switzerland. The Brazilian FA have reportedly written a complaint letter to FIFA over the "conduct of referee Mr. Cesar Ramos and the video assistant referee Mr. Paolo Valeri." 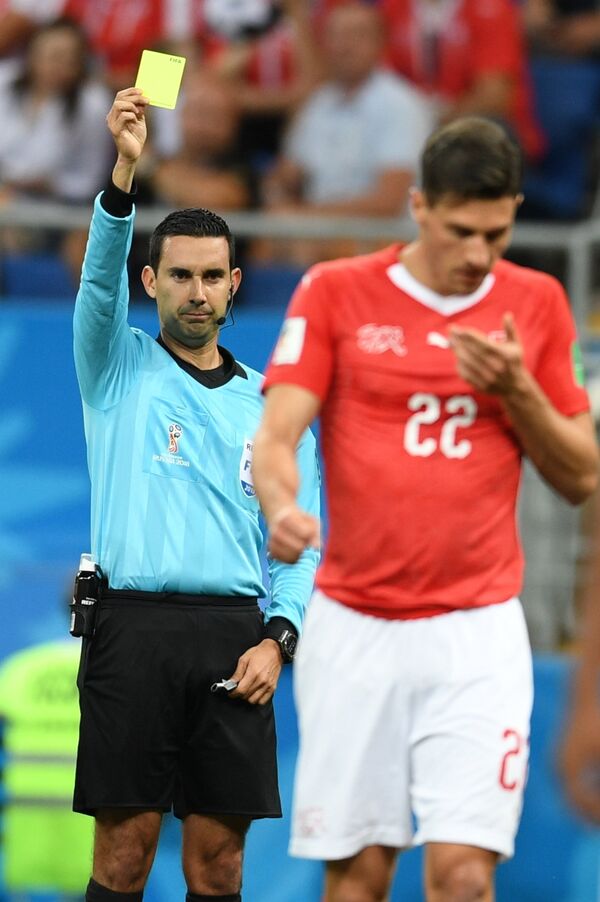 Brazil insisted they were wrongly denied a penalty, while the goal by their opponents should have been ruled out due to a foul against their central defender Miranda.

Another referee has been accused by a Moroccan player Nordin Amrabat of asking Cristiano Ronaldo for his shirt as a souvenir. Morocco faced Portugal on June 20, a match refereed by American official Mark Geiger, who has been on FIFA list since 2008. FIFA condemned the allegations and said Geiger "strongly refutes" the claims. 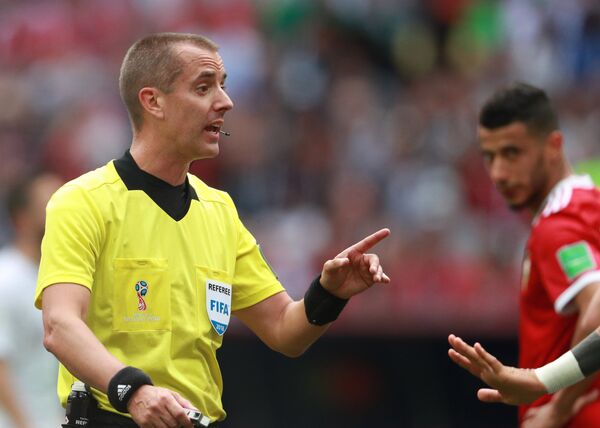 The referee Mark Geiger talks to an unseen player during the World Cup Group B soccer match between Portugal and Morocco at the Luzhniki stadium, in Moscow, Russia, June 20, 2018.
© Sputnik / Anton Denisov
/
Go to the photo bank

"FIFA referees are under clear instructions with regard to their behavior and relationship with the teams at the 2018 FIFA World Cup Russia and it can be confirmed that Mr Geiger has acted in an exemplary and professional manner as an appointed match official," FIFA said.

Before taking on refereeing Geiger was a high school math teacher.

A Saudi Arabia referee, Fahad Al-Mirdasi, has been withdrawn from the 2018 World Cup after he was banned by the Saudi Arabian Football Federation (SAFF) due to attempted match-fixing at the 2018 King Cup Final. His assistant referees were withdrawn as well. 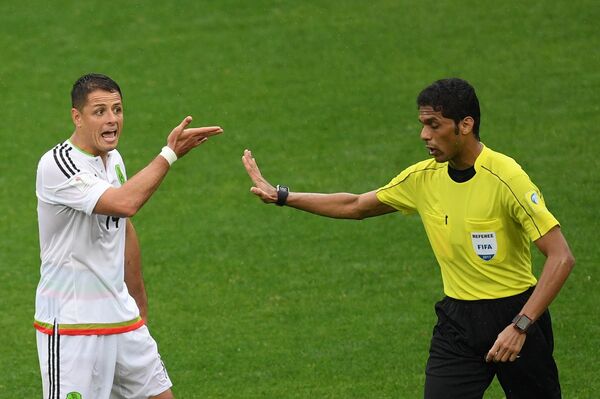 From left: Mexico’s Javier Hernandez and Referee Fahad Al-Mirdasi during the 2017 FIFA Confederations Cup third-place match between Portugal and Mexico.
© Sputnik / Alexey Filippov
/
Go to the photo bank
Newsfeed
0
Access to the chat has been blocked for violating the rules . You will be able to participate again through:∞. If you do not agree with the blocking, please use the feedback form
The discussion is closed. You can participate in the discussion within 24 hours after the publication of the article.
To participate in the discussion
log in or register
loader
Chats
Заголовок открываемого материала