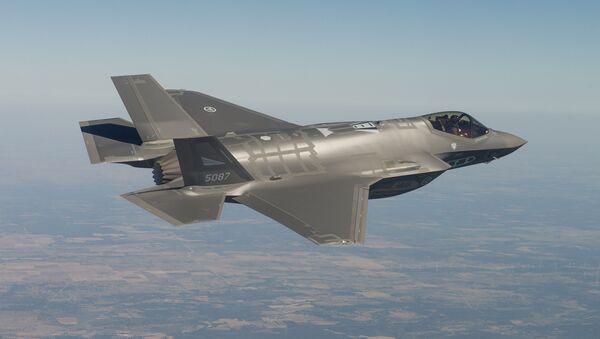 CC BY 2.0 / Forsvarsdepartementet / Testflyging av første norske F-35
Subscribe
The maintenance center, currently under construction at Rygge Air Base, is planned to serve US-made fighter jets from across Europe.

Following the arrival of the first F-35s, Norway, which is slated to become one of the foremost users of the costly fighter jets, has initiated the construction of an international aircraft motor maintenance center, national broadcaster NRK reported.

The construction works are run by the state-owned company AIM, which previously bought a plot of land from the Norwegian Armed Forces. The first shovel of dirt was symbolically turned by AIM Director Ove Haukåssveen.

"This will be a motor maintenance center for F-35 aircraft from all over Europe and probably from countries outside of Europe as well. The engines will be dismantled at their respective home bases and the faulty parts that need service will be shipped to us," Haukåssveen said.

The final price tag is not known, but AIM Director Ove Haukåssveen said the company intends to spend hundreds of millions of dollars on the Rygge project.

As of today, a similar maintenance center is under construction in the Netherlands.

"There will be competition for the orders and we need to start early to get them to Norway. We are spending a lot of money buying these planes, and it is important to get something back on the industrial side," Haukåssveen explained.

According to Haukåssveen, Rygge has a convenient runway suitable for larger aircraft. This, coupled with the old F-16 planes being gradually phased out and replaced by F-35s, may pave the way for AIM's expansion, with Rygge becoming the company's future main base.

Rygge Mayor Inger-Lise Skartlien is pleased with the company's arrival.

"Getting AIM to Rygge has taken a lot of time. It is not every day that we get a supply of many skilled jobs to Rygge and Østfold, and we are looking forward to it," Skartlien said.

At the beginning, the F-35 workshop will employ up to 100 people. The staff, however, may increase significantly once AIM decides to relocate to Rygge.

Norway plans to acquire up to 52 F-35 aircraft to the tune of NOK 81 billion (nearly $10 billion). Six of the planes have already arrived in Norway. Lifetime costs associated with the project have been estimated at NOK 270 billion ($35 billion). The list of other future operators of the F-35 includes Denmark, Italy, the Netherlands and the UK.

AIM operates military aircraft maintenance and aircraft parts production, and is owned by the Norwegian Ministry of Defense. The company's headquarters is currently located at Kjeller in Akershus.