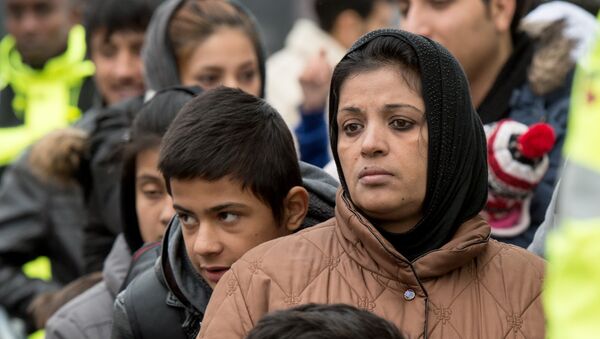 © AP Photo / Boris Roessler
Subscribe
After four hours of talks between Merkel and her Christian-democratic and conservative political party (CSU) and Germany's Social Democrats (SPD), late on June 26, lawmakers failed to resolve a row over the migrant policy threatening the coalition.

"On all questions, including on migrant policy, we have a very tense situation in the coalition…It is unsatisfactory that this week we are at a standstill and it is unclear what will happen," leader of Germany's Social Democrats (SPD) Andrea Nahles said.

When asked about preparing for new elections, she said: "I don't know. To be honest with you, we are waiting to see."

CSU parliamentary leader Alexander Dobrindt said he would not give Chancellor Angela Merkel more time to search for a European solution in order to reorganize asylum policy.

"From next week, we want migrants to be rejected at the border if they have already registered in another European country and should, therefore, go through the asylum procedure there. I do not understand talking about possible future solutions for Europe while not being prepared to do what Germany can do now," Alexander Dobrindt said.

The conflict in the CDU/CSU alliance came to the fore over the issue of migration.

Seehofer Threatens Merkel With Turning Asylum Seekers Away Ahead of EU Summit
German Interior Minister Horst Seehofer, who is also the leader of CSU, proposed turning migrants away at the German border if they had already been refused asylum, or had applied for asylum in another EU country.

On June 18, Seehofer gave Merkel two weeks to find a European solution to end an influx of asylum seekers, otherwise, he would order border police to turn back migrants.

Merkel's open-door migrant policy, which has led to the influx of more than 1.6 million migrants to Germany since the start of 2015, is blamed for the rise of the far-right Alternative for Germany (AfD), now the main opposition party.

The SPD has already started preparing for possible new Bundestag elections amid the conflict in the alliance between Bavaria's CSU and German Chancellor Angela Merkel's CDU.

Earlier in March, the SPD accepted to form a coalition with CDU/CSU, when all the parties saw the number of their seats in Bundestag go down in the last parliamentary elections in September, while the Alternative for Germany (AfD) became the third largest force in the German parliament with 94 seats out of 709.