Armed Conflict Between French Right and Muslims – How Real is the Threat? 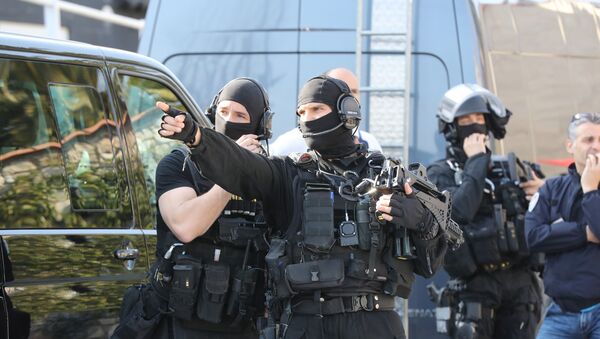 © AFP 2021 / Valery HACHE
Subscribe
The recent terror attacks and the spread of radical Islamist ideas in Europe have raised concerns about a possible uptick in anti-Muslim sentiment on the continent.

The arrests happened in areas around Paris, in the city of Vienne, south of Lyon, and in Corsica in a sting operation conducted by the DGSI secret service.

France Arrests Two Men Suspected of Preparing Terrorist Attack - Reports
This is already the second such operation since about a dozen people were detained last October on suspicion of preparing attacks on Muslim clerics and politicians.

In an interview with Sputnik France, Jean-Yves Camus, a political scientist and an expert on right-wing extremism, said that the past few years had seen a series of arrests of radicals who planned terrorist attacks and in some cases had come a long way in their preparation.

“The targets [of such attacks] are the same — Muslim prayer houses, Muslim activists, radically-minded imams  and jihadists who will soon be released from and were either to be killed or attacked upon their released from jail,” Camus said.

He added, however, that the situation was still far from the civil war the DGSI’s former chief Patrick Calvar had warned about in 2016, saying that « “the ultra-right is just waiting for a confrontation with [radical Islamists].”

”I think that such confrontation won’t take long coming. It’s just  a couple of terrorist attacks away now,” Calvar added.

According to sources close to the investigation, those arrested last weekend are part of a group with close links to the right-wing Operational Forces Action (Action des Forces Opérationnelles – AFO) led by Guy S., a retired police officer from Charente-Maritime.

According to the news portal Mediapart, the DGSI has recently warned about a growing number of “military or police officers joining self-defense groups which popped up right after the [recent] terror attacks.”

”There are people – just a handful of them but they are still out there – who served in the police or the armed forces, who believe that the authorities are not doing their job properly when it comes to fighting [radical] Islam,” Jean-Yves Camus explained.

He added that while the government is targeting radical Islamists, not Muslims as such, the “vigilantes” believe that the real problem is Islam itself, not only its radical forms and that taking up arms is the only way to solve this problem.

READ MORE: Thousands of Radicals Under Surveillance in France

For example, on the opening page of its website, the AFO says that it is training French soldier-citizens for a fight on the territory of France. This is followed by exhaustive information about the types of combat training, photographs, calls for action, etc.

Jean-Yves Camus said that with the present level of security oversight, all this activity has certainly not been lost on law enforcement agencies. He added that rightwing activists accounted for just a fraction of the more than 21,000 suspects police monitored last year.

“Radical Islamism tops the list of threats France and Western European in general are facing today. […] The number of those who are radically-minded and ready to act does not exceed 1,000,” Camus said.

000000
Popular comments
If France had to go to war, do you see these muslims fighting for the sovereignty of France ? To protect the liberty and Freedoms of the French ? No, I don't see this, they are happy to complain, take Government free money, ask for free medical, schooling and housing. However, they'll never put their life on the line to protect the liberty of France, the same goes for all the other countries they have arrived to, USA, UK, Canada, Australia, Spain, Italy, Greece etc.