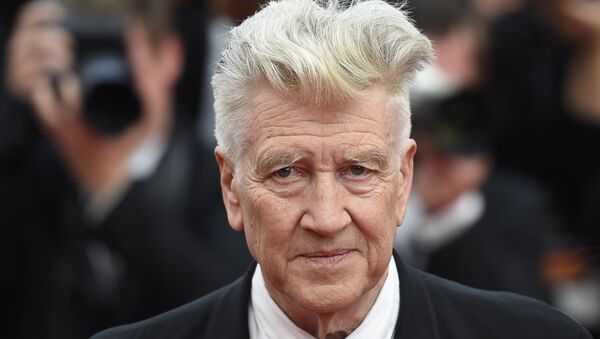 © Sputnik / Asatur Yesayants
/
Go to the photo bank
Subscribe
David Lynch took to Facebook to encourage Donald Trump to change his policies after the president had quoted the renowned film-maker’s remarks in a Guardian article at a rally in South Carolina.

After Donald Trump joked that David Lynch’s career in Hollywood was “officially over” for his suggestion that he “could go down as one of the greatest presidents in history,” Lynch issued a statement on his Facebook account to explain his comment, which had been perceived as support.

“I wish you and I could sit down and have a talk. This quote which has traveled around was taken a bit out of context and would need some explaining. Unfortunately, if you continue as you have been, you will not have a chance to go down in history as a great president. This would be very sad it seems for you – and for the country. You are causing suffering and division,” Lynch wrote.

The Twin Peaks director elaborated that it wasn’t “too late” for Trump to rethink his leadership:

“It’s not too late to turn the ship around,” he writes. “Point our ship toward a bright future for all. You can unite the country. Your soul will sing. Under great loving leadership, no one loses – everybody wins. It’s something I hope you think about and take to heart. All you need to do is treat all the people as you would like to be treated.”

Social media users took a moment to react to Lynch’s statement, with many describing his “change of heart” as a “backtrack”:

They all walk back what they said, even if they meant it.

Looks like Lynch wants to work in Hollywood after all.

Other users mocked Trump for taking the flattering remark out of context:

Because @realDonaldTrump saw the headline and as usual never read the story.

…while fellow netizens trolled Lynch, who never explains how to interpret his films, for finally being made to clarify what he meant to say:

Also, we've come to the point where David Lynch had to explain something. We made history right here, folks.

There were those who insisted that the film-maker did not approve of Trump in the first place:

At no point did he endorse Trump, and even elaborated on the original quote (which was sensationalized and taken out of context) to warn Trump about how history will look back on him if he doesn't change course

Lynch’s statement came after the sitting president tweeted the Breitbart News’ article, headlined “Director David Lynch: Trump Could Go Down as One of the Greatest Presidents.”

“Director David Lynch: Trump Could Go Down as One of the Greatest Presidents” https://t.co/AcgnIZNh6e

As he campaigned for Governor Henry McMaster in South Carolina on Monday, the president picked up the viral quote, reading it out loud from the Breitbart piece: “Veteran film maker David Lynch believes President Trump could be remembered as one of the greatest presidents in American history because of the way he has shaken up the political establishment…” and chipping in his own: “…because of what I’ve done.”

READ MORE: Congressional Intern Who Yelled ‘F**k You!’ at Trump Will Keep Her Job (VIDEO)

After reading the line that the director “now appears to believe that Trump may have been the right choice,” POTUS wound up saying:

“There’s David Lynch. Enjoy it because his career in Hollywood is officially over.”

In an all-encompassing interview with The Guardian on June 23, Lynch admitted that even though he wasn’t a “political person,” he voted for Bernie Sanders in the 2016 Democratic primary and remained “undecided” about Trump.

“He could go down as one of the greatest presidents in history because he has disrupted the thing so much. No one is able to counter this guy in an intelligent way. Our so-called leaders can’t take the country forward, can’t get anything done. Like children, they are. Trump has shown all this,” he told the media outlet.