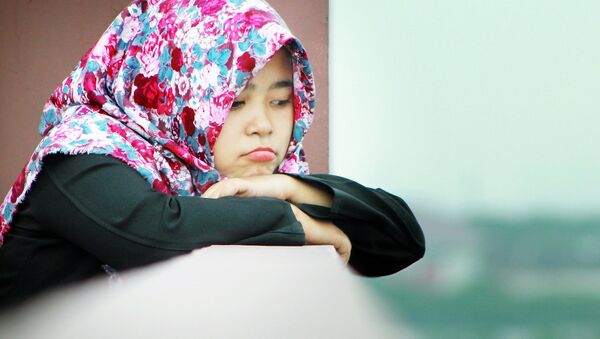 A municipal report on Nyköping's Brandkärr district raised the alarm over ongoing Islamization, but local inhabitants of the Somali-dominated area have challenged the authorities' take as "exaggerated," denying some of its most troubling findings.

According to a recent report, the area of Brandkärr in the Swedish town of Nyköping is on its way to become a parallel society, with symptoms of radicalization such as polygamy, Quranic schools and girls as young as two forced to wear hijabs, Swedish Radio reported.

The Brandkärr report identified polygamy as a common occurrence in the area, where 60 percent of the inhabitants have a foreign background. Furthermore, instances of Sharia Law and morality police were observed, including girls as young as two being forced to wear the Islamic headscarf and abstain from school dinners for religious reasons. The report also noted a high concentration of imams, with Quranic schools consuming a lot of children's time.

Somalis were found to constitute 60 percent of schoolchildren and over 90 percent of preschoolers, with Somali increasingly often becoming the default language and "monoculture" undermining the pedagogical mission and resulting in the staff having trouble understanding the children.

Lastly, Brandkärr was found to become increasingly secluded from the rest of Nyköping. Another problem associated with the district was escalating drug peddling, including the use of khat, a controlled substance commonly used in West Africa.

The report, which was part of the evaluation procedures for continued integration work, was based on-in-depth interviews with 26 people, most of them municipal employees, as well as police officers and representatives of the local housing authority. It was originally compiled last November, but gained press attention only recently.

According to Björn Littmarck, one of the authors behind the report, the municipality is standing at a crossing.

"If we are working with integration now and doing a good job, then Sweden and Germany will become major winners. We have got ourselves a young population, and that's exactly what we need. But if we fail to work well with integration, it can get tough," Littmarck ventured.

Urban Granström, Social Democrat chairman of the municipal council, stressed that the findings should be taken seriously.

The Somali Association, however, argued that the report's conclusions were exaggerated, and provided a skewed picture. Its representative Mahad Shek denied the presence of morality police, stressing that unemployment and housing were the major problems haunting the area.

Nyköping has over 30,000 inhabitants and is situation in Södermanland County south of Stockholm. In the years 2003-2017, the population of Brandkärr increased by 1,000 to 4,500, with the percentage of immigrants doubling.