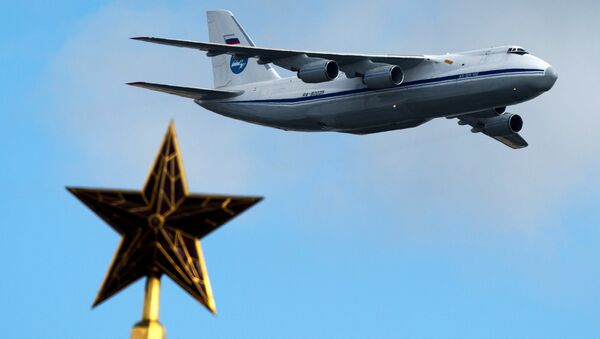 MOSCOW (Sputnik) - This year, Russia's United Aircraft Corporation will begin the coordination of a program to develop a super-heavy transport aircraft with the country's Ministry of Industry and Trade, the corporation's annual report revealed on Tuesday.

The company is prioritizing the preparation of a feasibility study for the super-heavy military transport aircraft and its approval by the Russian Industry and Trade Ministry in 2018, the report says.

Viral
Russian Su-30 Jet Pulls Up to Il-76 Transport in Midair, Peeks Inside Open Hatch
In early June, Commander of the Russian Military Transport Aviation, Lt. Gen. Vladimir Benediktov, said that the issue of resuming the production of Ruslan, which had been stopped in 2003, was being considered, but no decision has been taken. After that, UAC's Vice President for transport aviation, Alexey Rogozin, said that the production of the An-124 might be resumed.

The An-124-100 aircraft has a payload of 120 metric tons, making it among the world's most capable. "Ruslan" was developed in the first half of the 1980s by the Antonov design bureau in cooperation with leading Soviet research institutes, enterprises, aviation industry organizations and ministries. Russia's Aviastar-SP in the city of Ulyanovsk has produced a total of 36 An-124s.