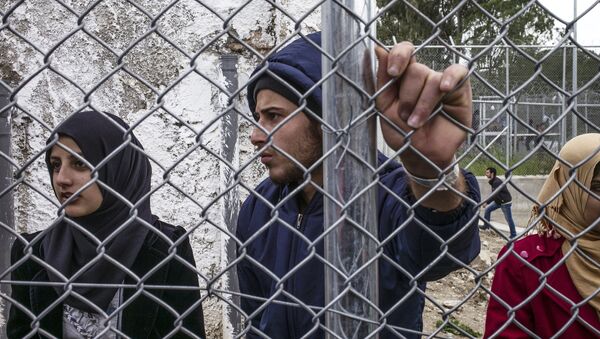 © AFP 2022 / Fabio Bucciarelli
Subscribe
Vienna, which is slated to overtake the EU presidency on July 1, has prepared a set of proposals for stricter migration policy. It includes creating camps for migrants rescued in the Mediterranean and a new, better protection system, making asylum seekers file their applications before they enter the bloc.

The Austrian government has prepared a document for discussion during July’s meeting of internal security officials, slamming the “fundamental weaknesses” on the EU border and previous migration policy, according to a Financial Times report.

“The migration crisis of 2015 and its consequences left many people with the impression that political elites and the EU as a whole have lost control of the situation,” the document, cited by the English newspaper reads.

The paper stresses the necessity to tackle the influx of young uneducated men from territories “characterized by patriarchal, anti-freedom and/or backward-looking religious attitudes”.

“Many of these are particularly susceptible to ideologies that are hostile to freedom and/or are prone to turning to crime,” the paper says.

The Austrian officials, who drew the paper, point at the failed attempts to integrate the “smuggled individuals,” as some of them reject the principle of living in free societies or have considerable problems, and warns, that the situation may grow worse for many years.

“As experience with immigration from regions that are characterised by patriarchal, anti-freedom and/or backward-looking religious attitudes has shown, problems related to integration, safety and security may even increase significantly over several generations,” it says.

Migrant Camps Outside the EU

To hinder bad scenarios, the document outlined a number of proposals to eliminate the described ”fundamental weaknesses”  of the bloc’s external borders, first of all, creating “a new, better protection system under which no applications for asylum are filed on EU territory,”  so migrants from Syria, Afghanistan and African countries would have to apply for asylum before entering Europe.

The document also suggests sending those, whose asylum applications have been rejected, to special centers outside the bloc’s territory. The proposal has been already brought up by Austrian Chancellor Sebastian Kurz, who advocates a hardline course on refugee policy.

Additionally, the paper proposes building camps in northern Africa for migrants rescued in the Mediterranean, which has already been discussed at the EU level and appreciated in Rome. Italy remains the main gateway for migrants crossing the sea, although the newly appointed government has taken a harder stance on migration and turned away several charity ships with hundreds of people aboard who had been plucked from the Mediterranean.

The set of measures states that the bloc should protect vulnerable people outside its territory “as close as possible to crisis regions,” which is seen as not only being cheaper, but also as more effective in combination with “sound external border protection with an effective common asylum policy” for countering illegal migration.

Austria, led by Sebastian Kurz and the government of his  conservative Austrian People's Party and the right-wing Freedom Party of Austria, who advocate stricter migration policy, are to hold the EU's rotating presidency for half a year on July 1 after the summit. The pan-EU meeting has been preceded by a mini-summit in Brussels, dedicated to migration issues.