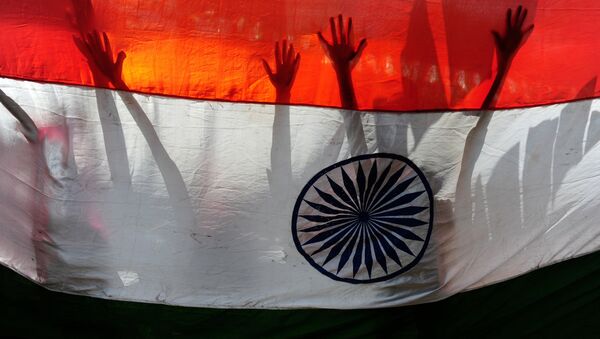 The United Nations Relief and Works Agency for Palestine Refugees has been confronted with an increased demand for services resulting from a growth in the number of registered Palestine refugees, the extent of their vulnerability and their deepening poverty.

New Delhi (Sputnik) — India has pledged $5 million for the United Nations Relief and Works Agency for Palestine Refugees (UNRWA). The agency was facing a critical shortage of funds after the US cut its contributions.

"I am pleased to acknowledge India for increasing its contribution from $1 million to $5 million and making this a new annual level," Pierre Krähenbühl, the UNRWA's commissioner-general, said at the UNRWA Annual Pledging Conference held in UN Headquarters in New York.

READ MORE: Narendra Modi to Visit Palestine in Less Than a Month After Hosting Israeli PM

The UNRWA was established in 1949 following the Arab-Israeli conflict to carry out direct relief and works programs for Palestinian refugees.

Modi Given Palestine's Highest Award for Contribution to Bilateral Ties
The UN agency has stated that Turkey, Japan, Canada and Norway have pledged additional contributions of at least $10 million each. Qatar, Saudi Arabia and the UAE are the biggest contributors, with each pledging $50 million.

"This is an unprecedented level of core funding from these three countries and deeply appreciated. I further thank the Government of Kuwait for its historic support," Pierre Krähenbühl added.

Earlier this January, US President Donald Trump announced that it would cut its contributions to UNRWA. The agency had been expecting $365 million from Washington but received only $65 million from the Trump administration.

More than $200 million was pledged in additional funding between March and May to the agency that serves about 5.3 million refugees scattered around the Middle East.

The agency claimed that this additional funding has provided the much-needed support to finance the current school year and all other services over the first half of 2018. However, the agency has warned that the available funds available would not be able to provide emergency operations beyond this month.

"The situation will be particularly critical for emergency operations in the West Bank and in Gaza. What is at risk is food for one million refugees in the Gaza Strip, as well as psycho-social support to people, particularly students in Gaza, as well as food, cash-for-work and essential assistance to 100,000 people in the West Bank," Pierre Krähenbühl said.