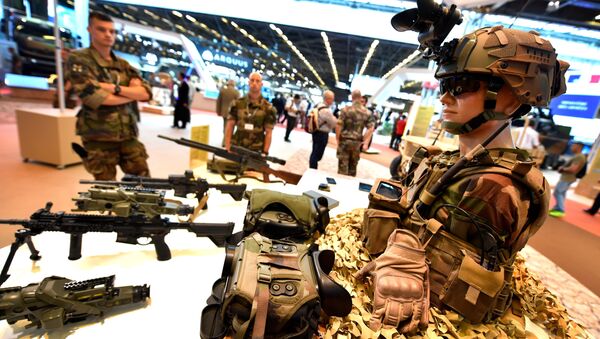 Sputnik discussed this with Professor Beatrice Heuser, Chair of International Relations at the University of Glasgow.

Sputnik: How significant will the creation of the European Union intervention force be?

Beatrice Heuser: It's an attempt to salvage something that is breaking, breaking quite horribly and that is an attempt to salvage British participation in European defense which was at the very beginning of the European defense integration. Let me remind you that it was Britain in 1948 that was the first to try and bring some form of European integration which would've included social, political, economic and defense cooperation.

Sputnik: Why does Brussels need this European Union intervention force when there is NATO?

Beatrice Heuser: Because simply the European Union had in the meantime adopted a number of little things that it could do even without NATO participation when you don't have to get it through all the veto powers of NATO.

With 1992 the Petersberg tasks of the European Union which at the time still was the European Economic Community, which was aiming to allow the European countries to work together to rescue nationals in case of a civil war somewhere, to work together in disaster relief and, of course, one of the biggest issues today is to work together when that comes to the big refugee crisis, so you don't have terrible things happening like a ship being turned back because one country is simply overfull with refugees and can't cope any longer.

Sputnik: It is reported that Britain would be able to participate in the new unit, what are the chances that it will or won't do so?

Beatrice Heuser: I imagine that this is a British initiative because it was in March that Mrs. May, at the behest of many people like me, who have been saying that Britain must enter into new defense agreements with Europe, actually declared that it would try to follow such a path and would try and bring about more cooperation with the European Union even despite leaving its the European Union for Brexit, so this is really a salvage attempt, to salvage something that has been established and has been there for quite a long time and will now break away unless something is done about it.

Sputnik: Corporation within the European Union is one of the key points in discussions with Brussels, how can this impact the ongoing Brexit negotiations between London and Brussels?

EU Can't Save Iran Nuclear Deal After US Exit - Top Iranian Military Leader
Beatrice Heuser: I think this would be a great gesture of goodwill on the part of the British because remember within the European Union there are only two countries that are really active in terms of military engagements and those are France and Britain, and the European Union is about to lose one of the two, which puts a disproportionate burden on to France and all the others, of course, who are just ducking away saying: 'We're not here, we can't do anything, sorry, we're caught up with other things.' So this is a very big gesture of goodwill on the part of London and, as I said, I bet it's a London initiative.

Sputnik: In your view what reaction can we expect from NATO on this joint European military force?

Beatrice Heuser: This is something that has been settled in the 1990s when there was a big competition at the time between what the European Union should try to do and what NATO should try to do and in the end a very strong compromise was worked out which was that for minor tasks the European Union should be able to act quickly and by itself using NATO facilities if necessary but that on the whole that any major issue, no doubt, would be handled by NATO.

So I imagine that NATO would very much welcome the fact that this is something that has been reestablished that has been agreed all the way back with the Petersberg tasks in 1992.

Sputnik: Do you think the creation of the European military force will result in the decrease of NATO's presence in Europe?

Beatrice Heuser: Absolutely not, these are all people who would be assigned to NATO or else could be assigned to European Command in case of need or else under national command, these are all the same people, it's always dealing with the same people, and, as I said, these big debates of whether something should be under EU or NATO were quite well resolved in the 1990s when it was simply made clear that it was to be decided ad hoc what sort of issue was troubling the allies and through which format they would act and whether this would be just a coalition of just a few willing members and whether it would be under larger NATO chapeau, all this was sorted out in the 1990s but it is now questioned with Brexit.

The views and opinions expressed by the speaker not necessarily reflect those of Sputnik.