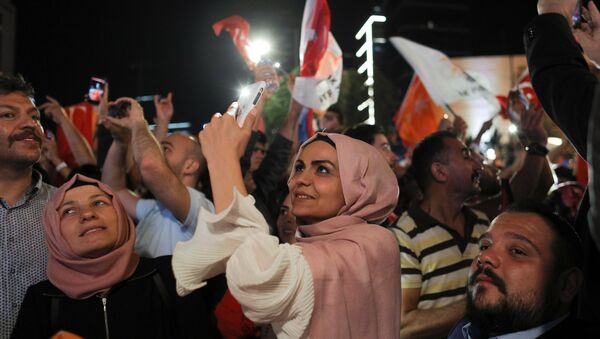 Turkish President Recep Tayyip Erdogan’s Sunday election victory will most likely translate into a more aggressive operation in Syria to expel Kurdish rebels from the country, said Nevzat Evrim Önal, a journalist with the Turkish newspaper SoL, and Max Zirngast, an independent writer in Istanbul, in an interview with Radio Sputnik.

Following his victory, in which he secured an absolute majority of votes, Erdogan that his government would continue to respond to those who threaten Turkey via terror organizations. He called on Turks to focus on the future after the election, and renewed his determination to improve rights and freedoms in the country.

​Moreover, speaking to his supporters at his ruling Justice and Development Party (AKP) headquarters in Ankara, Erdogan emphasized that Turkey would act more decisively against terrorist organizations and that his re-election was a public mandate for his policies.

"Our people have given us the job of carrying out the presidential and executive posts," he said in a short speech, Reuters reported. "I hope nobody will try to cast a shadow on the results and harm democracy in order to hide their own failure," the Turkish leader added.

Analysts who spoke with Radio Sputnik were not surprised by the outcome. "I cannot say that I am shocked [by the election results at all], Önal told Radio Sputnik's Loud & Clear Monday.

"With the existing electoral process in Turkey, it would have been impossible to beat Erdogan in any case and that's what happened," he told hosts John Kiriakou and Brian Becker.

Zirngast agreed, noting that "Erdogan won this election in a resounding way. It is not a complete shocker or a complete surprise. There was slight hope of a different result this time."

Jim Carey, editor at Geopolitics alert, told Sputnik News earlier this month that "the anti-Kurdish fervor gives him the excuse to knock out some of his [domestic] rivals, the biggest one being the Kurdish-backed party in Turkey."

On July 15, 2016, two years into Erdogan's presidential term, the Turkish military tried to throw Erdogan out of office, but the coup d'etat attempt was eventually suppressed. Following the incident, thousands of members of the civil and military ranks were fired. Erdogan's government blamed Fethullah Guelen, an exiled Muslim cleric, for instigating the coup.

Turkish troops, in cooperation with Syrian opposition groups loyal to Ankara, have participated in a number of military operations in Syria, mostly against Kurdish militants, such as the ongoing Olive Branch operation in Afrin and the Euphrates Shield held from August 2016 to March 2017. Damascus has condemned the Turkish military operations, saying they violate Syrian sovereignty.

The Syrian government condemned "aggressive" Turko-American military patrols near the northern city of Manbij and close to the border with Turkey on June 20, Sputnik reported.

Turkey has also begun a new offensive against Kurdish militias in Iraq, with which it also shares a border. Turkish Prime Minister Binali Yildirim announced June 13 that Turkish forces were carrying out military operations in northern Iraq to root out members of the Kurdish Workers' Party (PKK) in Qandil, Sinjar, and Makhmur, which Turkey holds to be a terrorist organization. The Iraqi government has angrily protested this incursion.