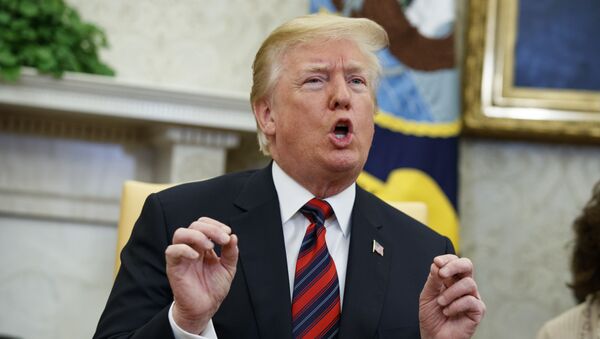 In the 5-4 decision, the court decided that "the Government has set forth a sufficient national security justification to survive rational basis review," according to the ruling.

READ MORE: Trump’s Travel Ban is Set to Become a Reality, but DACA Wins in Court

The US Supreme Court clarified that the lower courts, as well as the state of Hawaii, which tried to block Trump's travel ban, failed to prove that the president's initiative was in breach of either the US Constitution or immigration law. The ruling confirmed broad presidential credentials to define who is allowed to enter the country, which means that Trump's ban not only remains valid but it may be possible to add additional countries to the list.

Trump had immediately taken to Twitter to express his feelings towards the milestone decision.

Meanwhile, the White House called the ruling a big win for Americans and the county's Constitution.

"Today’s Supreme Court ruling is a tremendous victory for the American People and the Constitution. The Supreme Court has upheld the clear authority of the President to defend the national security of the United States," the White House's statement reads.

ACLU: US Supreme Court Should 'Put a Definitive End' to Trump's Travel Ban
The court's decision has put an end to a long-standing debate over the lawfulness of the US president's policy towards migrants from Muslim-majority countries.

Trump signed an executive order barring nationals from Iran, Iraq, Libya, Somalia, Sudan, Yemen and Syria from entering the United States on January 27, 2017. After the executive order had been challenged in court and revised twice, Iraq was removed from the list and some exceptions were allowed.

In December 2017, the US Court of Appeals for the Ninth Circuit ruled that a travel ban sought by Trump for six Muslim-majority nations could take full effect despite ongoing court proceedings.