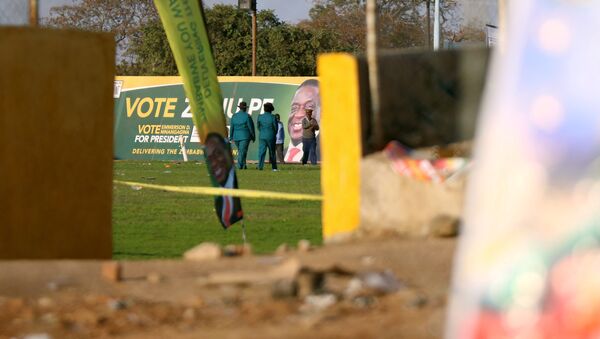 © REUTERS / Philimon Bulawayo
Subscribe
International
India
Africa
On Saturday, an explosion broke out in Bulawayo during a campaign rally of Mnangagwa representing the ruling ZANU-PF party. The president was not injured and was promptly evacuated from the scene. According to the most recent figures, the number of people injured in the blast stands at 49.

The recent explosion that occurred at a stadium in the Zimbabwean city of Bulawayo on Saturday during a campaign rally of President Emmerson Mnangagwa was an act of terrorism, Zimbabwean Vice President Constantino Chiwenga said.

"That act of terrorism which happened in Bulawayo is nothing, it does not deter us. But if the colleagues running for harmonised elections on the 30th of July are afraid and scared, they will be given security," Chiwenga said Sunday, as quoted by the Herald newspaper.

Africa
Zimbabwe to Vote for President, Parliament for First Time in 37 Years - Reports
The official pledged to bring people responsible for the incident to justice. The investigation into the incident is reportedly ongoing.

The Russian Embassy in Zimbabwe has issued a statement condemning the recent assassination attempt on Zimbabwe's president Emmerson Mnangagwa. The statement said that the Russian side wished speedy recovery to everyone wounded in the attack.

On July 30, the Zimbabweans will elect new president. The vote will take place for the first time since end of rule of ousted Robert Mugabe. Mnangagwa, who previously served as vice president, was sworn in as Mugabe's successor.