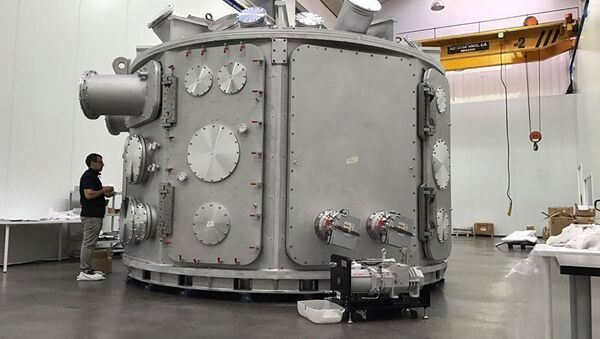 © Photo : ELI Beamlines
Subscribe
In collaboration with their colleagues from Germany and the Czech Republic, researchers from the National Research Nuclear University MEPhI’s Institute for Laser and Plasma Technologies developed a new method for generating superstrong quasistatic electric fields that result in the acceleration of ions in laser plasma.

This research is of great importance in medicine, particularly for proton beam therapy, a modern cancer treatment. The paper was published in the prestigious scientific journal Scientific Reports.

There are three major methods for treating cancer: surgical intervention, chemotherapy and radiation (radiotherapy). Radiotherapy is based on applying ionizing radiation, which is detrimental to both the tumor and the healthy tissue surrounding it. This imposes certain limitations on the power of gamma ray beams, which are used in radiotherapy.

That is why it is much better to use protons. Due to the relatively large mass of protons, the beam stays focused, allowing scientists to precisely target tumors without damaging the healthy tissue surrounding them.

New Russian Cancer Drug Increases Survival Rate of Mice by Over 50%
However, generating a proton beam requires a particle accelerator, which is a very expensive piece of equipment weighing many tons. For instance, the synchrocyclotron accelerator used at the therapeutic center in Orsay, France, weighs a total of 900 tons. That is why many world universities are currently working on developing alternative methods for generating beams of ultrafast charged particles. One of them is based on laser beam accelerators.

Laser beam accelerators are significantly cheaper and more compact than conventional cyclotrons and synchrotrons, but the quality of the beams obtained with their help is not sufficient for most practical applications due to the protons' large energy range and insufficient power. Today, researchers are competing to develop new laser acceleration methods: obtaining a proton beam with a power of 100-200 MeV and an energy range of no more than a few percent would usher in a new era in laser medicine.

According to MEPhI researchers, the theory they developed can help lead to new laser acceleration methods. "In our research, we predicted in theory and demonstrated, with the aid of numerical modeling, an effect that is seemingly paradoxical: the effect that the radiation reaction force has on the charged particles, which are emitting electromagnetic waves, can contribute to their acceleration," said Yevgeny Gelfer, assistant professor at MEPhI's department of theoretical nuclear physics and research scientist at the Extreme Light Infrastructure Beamlines Institute in the Czech Republic.

In ordinary mechanical systems, friction forces always lead to the loss of kinetic energy and the attenuation of organized motion. The radiation reaction force, however, acts differently — it arises as a result of energy transfer in the external field (in this case, the laser field). This energy transfer is carried out by electrons. During the process of transferring energy from one reservoir to another, electrons can slow down and speed up.

"We studied the propagation of superstrong laser impulses in plasma," Gelfer said. "In electromagnetic fields with intensity of several PW and higher (1 PW equals 1015 W; the capacity of the largest power station in the world is 22,500 MW, which is about 50,000 times less), electrons emit radiation so intensively that their movement is defined not only by the Lorentz force, but also by the radiation reaction force, which arises as a result of radiation recoil. In fact, the latter can even exceed the Lorentz force. We proved that our slowing down of electrons with the help of radiation friction in the plane perpendicular to the direction of the laser beam's propagation increases the speed of their movement, thus contributing to more effective charge separation in plasma and amplification of the formed longitudinal electric field. This field causes the acceleration of ions, which is why our findings can contribute to the development of new ways to obtain high-quality ion beams."