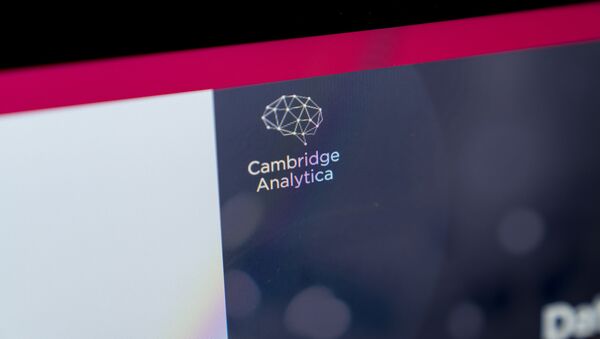 MOSCOW (Sputnik) - Facebook will start conducting a forensic audit on now-defunct political consultancy Cambridge Analytica once it receives a permission by the UK Information Commissioner Office, Steve Satterfield, Facebook's director of public policy and privacy said at a European Parliament hearing on the data harvesting scandal on Monday.

"The best information we have suggested that no European user data was shared by Dr. Kogan with Cambridge Analytica. This is backed up by the contracts Dr. Kogan’s company GSR had with Cambridge Analytica; it is backed up by Dr. Kogan’s testimony on the subject; it’s backed up by our own internal analyses. Now we won’t be able to conclusively confirm this until we conduct a forensic audit of Cambridge [Analytica] which we plan to do as soon as we are authorized by the UK Information Commissioner’s Office," Satterfield said.

Satterfield stated that Facebook, as a result of the Cambridge Analytica's actions, is investigating all apps which had been storing large amounts of user data since 2014.

"We are investigating every app that had access to large amounts of information before we changed our platform in 2014. Where we have concerns we will suspend the app and where we conclude the data was misused we will ban the app completely and tell everyone affected. So far we have investigated thousands of apps and suspended more than 200," Satterfield said.

'Its Easy to Blame Facebook; They’re Big Enough to Take the Hit' - Expert
In May, Cambridge Analytica and its parent company SCL Elections announced that they would close their offices and declare bankruptcy in the United Kingdom and the United States following a scandal over the misuse of Facebook data.

Facebook faced sharp criticism after it emerged in March that personal data of about 50 million of its users had been harvested by Cambridge Analytica without their permission through a special app designed by Alexander Kogan. The information was allegedly used to help target political advertising. In early April, Facebook estimated the number of users affected at around 87 million.