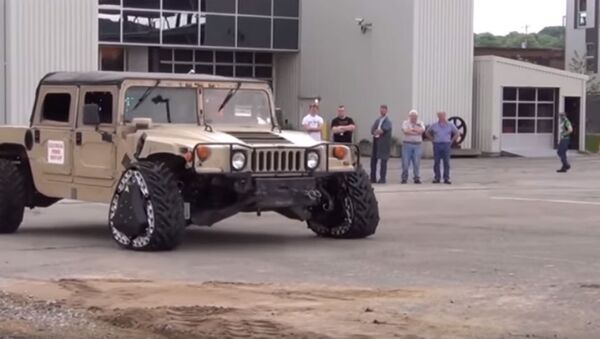 The US Defense Advanced Research Projects Agency (DARPA) has created a new transforming wheel it says is suitable for rough terrain as part of its Ground X-Vehicle Technologies program. However, sharp-eyed and skeptical social media users said that the project looks like an incredible waste of taxpayer money.

DARPA showed off its Reconfigurable Wheel-Track (RWT) in a video, with the custom wheels shown to be able to transition from a standard round wheel into a triangular track, depending on terrain. DARPA boasts that the wheel will improve the "mobility, survivability, safety and effectiveness of future combat vehicles without piling on armor."

But social media users aren't too sure, arguing that the design promises none of those things and reminding DARPA that simplicity almost always defeats complicated on the battlefield.

It's like having an extra AWD transmission coupling inside each of your spinning wheels. What could go wrong?

Lmao
Fixing a problem that doesn't exist.
And making it as over complicated as possible.
At some point while talking about drawing this idea, someone must have pointed out that there is NO real application for this technology,
Simpler solutions are already available.

It's going to reconfigure that Humvee from in-service to a broken stationary target with that much complexity.

That's bad ass but how does it do after taking a hit from an rpg?

Others suggested that the wheel would be absolute nightmare for mechanics.

Cool, except for the mechanic needing empty space in the hub. Debris or rocks in one of them and it won't close making your truck off kilter.

Yeah, we can't keep simple ball joints and A arms from breaking every other day, but I'm sure those'll last.

We use these tracks on vehicles in Antarctica.
They suck. Every time they broke, they'd go into the shop, come back out and be broken again in a day.

Others still complained about the system's expense compared to standard wheels.

What problem are we trying to solve here? I mean we're going to spend what? 10 grand on some contraption that can be done by $400 tires?

I wonder if that DARPA reconfigurable wheel can also reconfigure itself into public school funding, mental health services or a library.

"Hey congress, give us $10billion to literally reinvent the wheel"

Naturally, the technical and cost complaints were also rounded out by the comments of a few jokers.

How about combining tires with the power of TIGER CLAWS?https://t.co/TiZx14JdQl