PhD Explains What Powers Erdogan Will Gain if He Wins Election 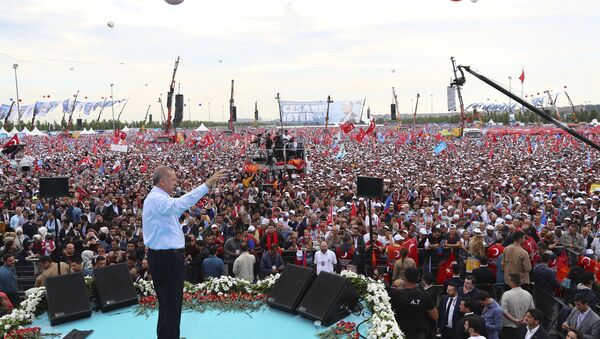 Turks headed to the polls Sunday for snap presidential and parliamentary elections. Observers say the vote could mark a turning point for Turkey's political system, solidifying the additional powers granted to President Erdogan in last year's referendum. Turkish foreign policy expert Zenonas Tziarras outlines what the vote will mean for the world.

Sputnik: What is the main significance of these elections, in your estimation?

Zenonas Tziarras: These are historic elections for a number of reasons. Perhaps the most important is that the Turkish political system will transition into a presidential democracy with many powers concentrating to the person of the president, which most probably will be Erdogan, although this is not certain.

This will complete (or start the completion of) a transition that has been taking place in Turkey on a social, political and economic level over approximately the past fifteen years.

Erdogan, AK Party Lead in Turkish Elections With 50% of Votes Counted - Reports
It's very important, because the character and the nature of the Turkish state and Turkish society is changing, and this has a number of implications for its foreign relations as well, including how Turkey engages its Western partners or its new partners to the East…

So the whole world is looking, because the domestic [outlook] of Turkey is changing, but also the international outlook of the country as well.

Sputnik: Can you tell us about what exactly is going to be the primary change in the political system made following the vote? The president will have more powers, but how much of an impact is that going to have, and what role will parliament now be playing?

Key Snap Presidential, Parliamentary Vote Kicks Off in Turkey as Polls Open
So the president basically will have the authority to combine to some degree the different authorities of the state, like the judiciary, and the legislature, and executive. So this will become more of an authoritarian state than a democracy; most of the decision-making processes will revolve around the president. The parliament will have some control, but this will also depend on the [composition] of the parliament after the elections, and whether the Justice and Development Party and the Nationalist Movement Party will maintain their majority within the parliament or whether the opposition coalition will manage to take it.

All bets are off at this point and the most possible scenario is that the ruling party will lose the majority in these elections.

Sputnik: Recently there was a constitutional referendum where Turks decided to give more power to the president and create what you correctly called a 'more authoritarian state'. What do you think drove people to vote for this?

Zenonas Tziarras: To be fair, we should remember that it was only a marginal [victory] of 51.4%, but you're right that it was still a 'yes' vote and the constitutional amendments [passed].

HDP Member Suggests Erdogan's Election Victory May Trigger Political Crisis
I think that many people believed in Erdogan's narrative that a stronger president and a stronger presidential system would entail a more stable and stronger state. This has also to do with the fact that almost half of Turkish society is largely conservative, and Erdogan has managed, especially since 2015, to capitalize on conservative and nationalist sentiments and attitudes within the public, and gather up the votes on the basis of this rhetoric and narrative instead of what's been going on in the economy.

The economy has been collapsing, but at the same time, Erdogan has found a way to gather up votes on a different sort of ideological basis, that has a lot of degree of conspiracy and Turkish exceptionalism [at its core]. This has allowed Erdogan to get the majority that he wanted in the last referendum, but as I've said, it was only marginal, and actually many analysts have said that there was some vote-rigging of around 2 million votes…These were the votes that allowed Erdogan to get his 51.4%.

Dr. Zenonas Tziarras is a post-doctoral researcher at the department of social and political sciences at the University of Cyprus. The views expressed by Dr. Tziarras are those of the speaker, and do not necessarily reflect those of Sputnik.