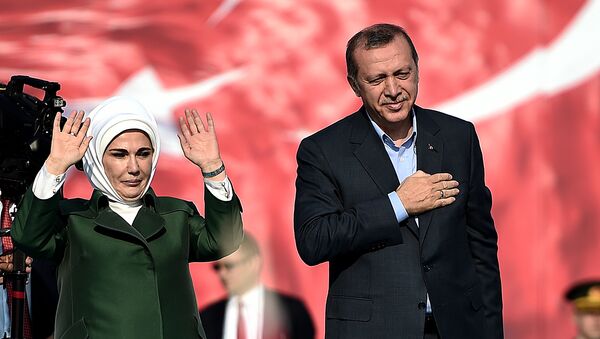 The victory of incumbent Turkish President Recep Tayyip Erdogan in the upcoming presidential vote scheduled for June 24 will be illegitimate and will most likely trigger a governmental crisis, deputy chair of the People’s Democratic Party (HDP) parliamentary group Filiz Kerestecioglu told Sputnik on Saturday.

"Even though Erdogan wins this [presidential] election, we also believe that there will be also certain frauds at this election. So his presidency and this change is the system will not be legitimate in the eyes at least majority of the public," Kerestecioglu said.

The party believes that the presidential election should go to the second round, and even though Erdogan wins the presidency, he will not be able to gain the majority of seats in the parliament, she stressed.

Turkish Election Likely to Have 2 Rounds, End in Erdogan's Victory - Analysts
Opposition’s parliamentary majority will be a positive step toward democracy in Turkey, the politician said.

The HDP will contest election results, if it fails to pass the threshold and get seats in the parliament, Kerestecioglu said.

"The results of the elections could be questionable so we can apply to all the legal things that we could handle. We will follow all the legal procedures that we can," she said.

The party is aspired to continue its struggle within the civil society, the official stressed. In addition, Filiz Kerestecioglu also said that a fair justice system and the termination of the state of emergency in Turkey are vital for the creation of an opposition alliance with participation of the HDP.

"This [future possible] alliance [of opposition parties] should have certain principles. The first principle should be that every citizen can reach the justice so that the fair justice system should be established. And the second one is that after people reach the justice, a democratic constitution should be established. And third principle is that should be an abolition of the state of emergency. And fourth, the parliamentary system should be strengthened again," Kerestecioglu said.

Turkey’s Decision to Hold Snap Elections ‘Linked to US Military Plans’ – Expert
The alliance, which would include all opposition parties, will also observe the election in order to its ensure fair results, the lawmaker added.

"I believe that the opposition will gain more votes and will have the majority in the parliament," the politician underlined.

Kerestecioglu noted that the existing opposition alliance was more tactical than ideological, as it was established for the upcoming elections in order to help each other pass the threshold and enter the parliament.

In early May, the Republican People’s Party (CHP), the IYI (Good) Party, the conservative Saadet Party and the Democratic Party announced that they had formed a coalition to challenge the alliance of President Recep Tayyip Erdogan's ruling Justice and Development Party (AKP) and the Nationalist Movement Party (MHP) in the June 24 snap elections. The HDP has not joined the coalition.

On April 18, Erdogan announced the snap presidential and parliamentary elections, explaining the move by the need to switch to the presidential system in the country and enforce the constitutional amendments that were adopted after a referendum in April of last year. The elections were initially scheduled for November 3, 2019.

Can Erdogan Retain Power? Turkey on Verge of Presidential Election
Six candidates will run in the Turkish presidential election: Erdogan, Muharrem Ince of the Republican People's Party (CHP), Selahattin Demirtas of the HDP, Meral Aksener of the iYi (Good) Party, Temel Karamollaoglu of the Felicity Party, and Dogu Perincek of the Patriotic Party.

Turkey will hold its early presidential and general elections on June 24 to ensure a rapid transition to a presidential republic. The country has been in a prolonged state of emergency and is taking measures to bolster presidential powers following a failed coup attempt in July 2016.