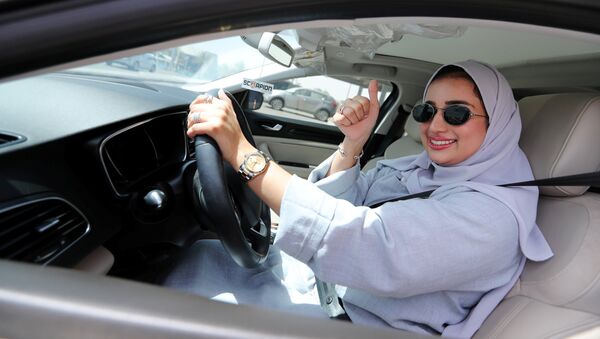 CAIRO (Sputnik) - The decree allowing Saudi women to drive cars entered into force on Sunday and many female drivers hit the road for the first time.

A number of TV channels broadcast videos showing dozens of women taking to the wheels of their cars right after the ban was lifted.

Moreover, Saudi Ambassador to Bahrain Abdullah bin Abdulmalik Al-Sheikh said on Monday that Saudi female drivers would be able to travel by car and cross into neighboring Bahrain without men.

Think Pink: First Ladies-Only Parking Spots Set Up in Saudi Arabia
"Saudi women have the right to independently cross by car into Bahrain via King Fahd Causeway on June 24, and Bahraini women can come by car to Saudi Arabia and drive across its territory without being unaccompanied by men starting from next Sunday," Abdulmalik Al-Sheikh told Akhbar al-Khalidj newspaper in an interview.

Saudi Arabia is believed to have witnessed a series of major changes that touched the country's economy, social and political spheres, since King Salman bin Abdulaziz Al Saud took the throne in 2015.

A big day to remember for all Saudi women 🇸🇦 ♥️ #المراه_السعوديه_تسوق pic.twitter.com/eM3EzEzZfd

A significant role in the reform process is attributed to Mohammed bin Salman, who was appointed as Crown Prince in June 2017. Within the framework of the reforms women have already been allowed to attend public entertainment events and serve in the armed forces.