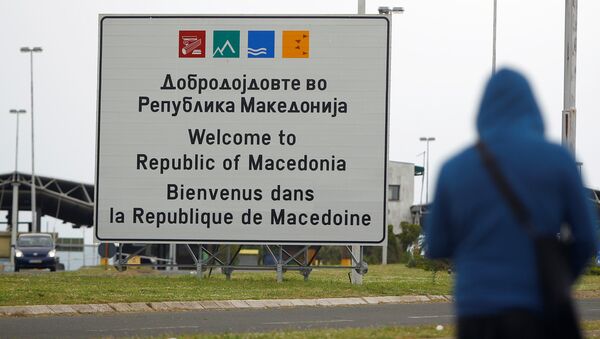 ATHENS (Sputnik) - Russia's Permanent Representative to the EU Vladimir Chizhov in an interview with the Ekathimerini newspaper expressed hope that the settlement of the name dispute between Athens and Skopje would contribute to the stability but suggested that Macedonia’s subsequent accession to NATO would be a “mistake with consequences.”

“Of course, we will not drop nuclear bombs … As I said, every country has the right to make its decisions and make its own mistakes. Yet, there are mistakes … There are mistakes that have consequences,” he said, when asked about Russia’s reaction to the possible accession of Macedonia to NATO in the light of the recent deal on the country’s official name.

He also commented on the deal itself.

“In my view, this issue should have been settled long ago, so as the two countries could have good-neighborly relations and cooperation.  As for the substance [of the agreement], we will see how the situation will be developing, since we know it has not been met with a unanimous reaction in both countries,” Chizhov said.

He added that he would not like to comment on the constitutional processes related to the change of the country’s name and expressed hope that the name dispute would be settled at a bilateral level without external interference.

“Though this agreement, we hope, will foster stability on the Balkans and cooperation between the two states, it should not be viewed as an excuse for a quick accession of your neighboring country to the military alliance,” the diplomat stressed.

Russia does not oppose the EU enlargement since each country has the right to make its own decisions, but has somewhat different stance on NATO, he added.

“NATO enlargement is something different. Basically, it is an attempt to counter threats and challenges of the 21st century through the means and mechanisms of the 20th century,” he concluded.

On June 17, Athens and Skopje signed an agreement on a new name of the former Yugoslav Republic, agreeing on renaming the country to the Republic of Northern Macedonia. On Friday, NATO Secretary General Jens Stoltenberg announced that the alliance would invite Macedonia to start accession talks during the upcoming NATO summit in Brussels scheduled for July 11-12, given that the name dispute that has long been a sticking point in the two countries’ relations seems to have been tackled.

Macedonia gained independence from Yugoslavia in 1991. Athens has been in dispute with the country over its name, claiming that Macedonia might have territorial claims to Greece’s own region of the same name. In the 1995 interim bilateral accord, Greece agreed that the term FYROM would be applied to Macedonia until the dispute was settled.

Macedonia's Parliament Ratifies Deal With Greece on Renaming the Country
On Wednesday, the Macedonian parliament ratified by the majority of votes the draft law on the agreement with Greece on renaming the country. The draft bill will now be sent to President Gjorge Ivanov, who already said he would not sign it. If the president vetoes the draft, the document would require a repeat ratification with an absolute majority.

Macedonia’s new name should be approved by the public at the referendum. Moreover, a bilateral treaty should be signed by the Greek and Macedonian governments, and amendments to the Macedonian constitution should be introduced.

The resolution of a years-long dispute between the two countries paves the way for Macedonia to join NATO and the European Union.