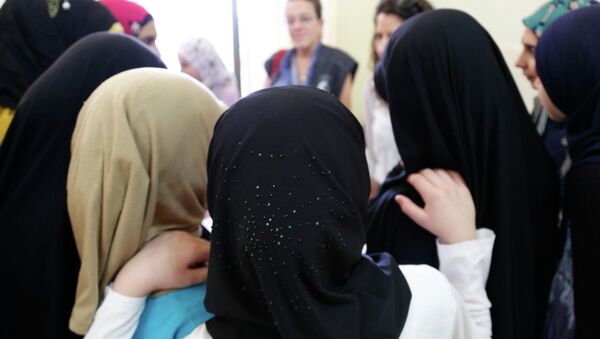 © Flickr / DFID
Subscribe
A school in North Rhine-Westphalia has ordered burkinis, full-body bikinis, for its Muslim students to ensure that these girls can attend swimming lessons. The move has been criticized by state officials and educators, who have condemned the decision as "absurd” and wrong.

The Pestalozzi-Gymnasium in Herne in northern Germany had purchased 20 burkinis for swimming lessons for some of its Muslim students, which triggered debates on integration in Germany several days ago.

The director of the school, Volker Gößling, justified the decision in an interview with German newspaper Westdeutsche Allgemeine Zeitung, saying, “No one will have an excuse to miss classes" thanks to it, and claiming that Muslim girls could also attend lessons now. Already 15 students have used this opportunity.

"I think that this decision is very absurd," Birgit Ebel, a schoolteacher from the northern German state of North Rhine-Westphalia (NRW) and Islam researcher from Herford, told Sputnik.

READ MORE: Millions of Germans in Poverty While Islamists are Paid Thousands of Euros – AfD

"This looks like a goal conflict as, on the one hand, you want all children to learn to swim and all children – including Muslim girls – participate in swimming lessons. On the other hand, it opens a door for political Islam, which insists on such clothing rules in accordance with conservative, ultra-reactionary and political Islam norms for girls, and we talk about children here. This is taking a wrong direction. In my opinion, this doesn’t promote integration, but it contributes to creating parallel societies," the local educator said in an interview.

"Burkini purchase is not one of the basic tasks for a school," State Minister of Education of North Rhine-Westphalia Yvonne Gebauer, representing the Free Democratic Party (FDP), said. State Secretary for Integration Serap Güler from the Christian Democratic Union (CDU) echoed this position saying, "We should not promote burkinis for girls here in Germany. I think this is an absolutely wrong signal and completely wrongly understood tolerance. This is fatal, especially taking emancipation into account."

Ebel stated that Muslims living in Germany "simply have to learn to accept our rules of equal treatment of all sexes."

"This school should towards this direction instead of giving in to an obligation for women to fully cover the body," she told Sputnik, supporting the reaction of the state authorities, which she describes as "right and reasonable.”

“I would have wished for clearer words from the new [State] Minister of Education. Regarding the question of the lawful prohibition of a headscarf for girls under the age of 14, a clearer attitude should be demonstrated," Ebel insisted.

At the same time, the regional branch of the Union for Education and Science (GEW) in North Rhine-Westphalia supported the decision of the school, describing it a "success for integration," according to local outlet Neue Westfaelische.

"The solution is pragmatic, and it prevents arguments between school staff, students and parents, which can negatively influence the school climate," said the deputy chairman of the X, Maike Finnern.

Ebel criticized such an approach in the interview with Sputnik.

"We do not live in Saudi Arabia, where the sexes are totally separated with a kind of apartheid system. I think, this is wrong," the educator stated, pointing out that many claims by some organizations should be taken skeptically.

According to her, the liberal German society is constantly "yielding to demands of ultra-conservative Islam."