'Leave' Supporters Rallying in London, Blaming May for Uncertainty Over Brexit 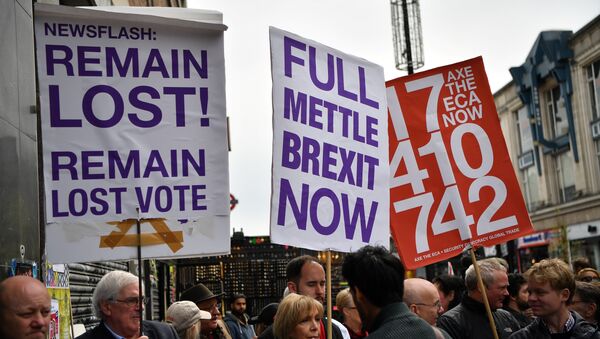 Pro-Brexit supporters took to London streets Saturday for the UK Unity and Freedom march, demanding to "focus on freedom from the EU", The Guardian reported. The demonstration was opposed by a rival rally, backed by the George Soros-backed group "Best for Britain", which is calling for a second referendum.

Thousands of people decided to take part in the UK Unity and Freedom march on Saturday, which marks two years since the historic Brexit referendum, The Guardian reported.

Demonstrators were shouting "We do we want? Brexit! When do we want it? Now!", "Whose country? Our country!", as well calling to free Tommy Robinson at the rally. Most of them hold banners "We want our country back" and "Make Britain great again".

Some of the speakers attending the rally have blamed the government, namely Prime Minister Theresa May, for uncertainty over the Brexit, insisting that British people had made their choice during the referendum and this choice should be respected. As they explained, most of the current member of the UK government support staying in the European Union, thus creating obstacles for the talks.

Some right-wing political figures attended the rally, such as UKIP leader Gerard Batten, members of the Pegida group, as well as the English Defence League. The demonstration started in Victoria at 2 p.m. and headed to College Green, near Parliament Square, before proceeding all the way to the Eid celebration in Trafalgar Square.

The march was taking place amid UK Foreign Secretary Boris Johnson's calls on British Prime Minister Theresa May to ensure a "full British Brexit", following Cabinet warnings that the UK could walk away from the talks with Brussels without a deal.

Today’s @peoplesvote_uk march will be the biggest protest London has seen in decades we cannot trust Tories or Labour on Brexit the people must decide jkib us #PeoplesVoteMarch pic.twitter.com/kc1s9Z0bob

Other negotiators prepared for a difficult scenario: thus, UK international trade secretary Liam Fox said the UK was not "bluffing" about being prepared to walk away from talks with Brussels and Brexit secretary David Davis said there is "lots going on" to prepare in case negotiations collapse.

#PeoplesVoteMarch
The People’s Vote protest, due to start at 12pm to day, London, and go from Pall Mall to Parliament Square is gathering momentum. Do you want to be part of this historic moment that helped to #StopBrexitAndSaveBritain?

Why not come along, and add YOUR voice! pic.twitter.com/Wod7DcUp6k

The march was opposed by a rival demonstration, the People's Vote protest, organized by anti-Brexit groups based at Millbank Tower, led by Open Britain and supported by the George Soros-backed group Best for Britain, which is campaigning for a second referendum. The two demonstrations coincided, as the latter ended near the Eid celebration in Trafalgar Square. However, no clashes or damages have been reported.