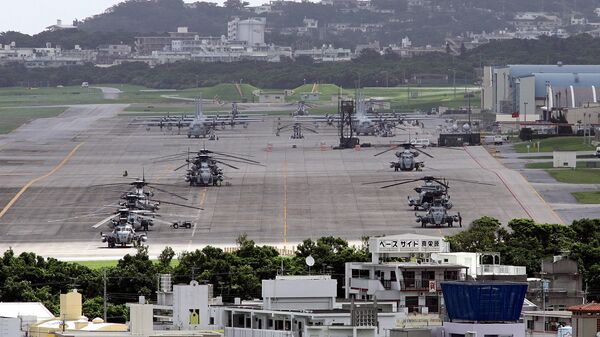 Japanese Prime Minister Shinzo Abe commented the incident with a stray bullet, which struck a farm in Okinawa Prefecture and was supposedly fired from the US nearby military base.

"That is a serious problem which affects people’s lives. I have called on ambassador Hagerty to cooperate [on the issue], the shooting range [on the territory of the US base] has been temporarily closed," Abe said, as quoted by the NHK broadcaster.

The comment referred to a Friday's media report, saying that a stray bullet struck windows of a farm located near the US Marine Corps' Camp Schwab in northeastern Okinawa Prefecture. The bullet supposedly struck the house during live-ammunition drills which have been carried out by the US troops since Monday. The investigation into the incident is underway. Shortly after the incident, Abe reportedly met with US Ambassador to Japan William Hagerty and asked for cooperation on the case.

The statement was made at a ceremony marking the 73rd anniversary of the end of the Battle of Okinawa between the Imperial Japanese Army and US forces, which killed more than 200,000 people, including a quarter of the entire population of Okinawa.

According to the broadcaster, during the ceremony, Okinawa Governor Takeshi Onaga read out a declaration of peace and expressed his opposition to a planned relocation of a US airbase to a new site, also in Okinawa. The official cited easing tensions in East Asia in the light of the June 12 US-North Korea summit earlier as one of the arguments.

READ MORE: US Marine Commander on Okinawa Sacked for ‘Loss of Trust, Confidence'

The US military maintains a substantial presence in Japan, with US Forces Japan (USFJ) consisting of over 50,000 military personnel and 8,000 civilian employees. A large number of US bases are located in Okinawa, but there have been some tensions between local residents and the US military, in part, over aircraft incidents and incidents related to troops' behavior.